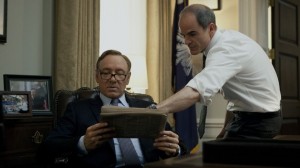 “Chapter Two” (A-)
Improves upon the premiere in every way. Frank’s conniving to get rid of Michael Kern (Kevin Kilner) as Secretary of State is absolutely genius and makes for riveting television. Sure, using
“Free Bird” during a scene at a hippie-burnout’s trailer is way too on-the-nose, but a show that constantly breaks the fourth wall is not about subtlety, especially if there’s also a scene where one woman accuses the other — a rising star — of sleeping with someone to get there. Also, I wish they were channeling Robin Wright’s terrifying iciness into a better story.

“Chapter Three” (B)
A bit of a downgrade because it’s difficult to care about anything other than Frank in this episode, and while that story’s important in terms of making Frank sweat, its actual plot is incredibly stupid. To wit: A teenage girl is killed texting while driving about a peach-shaped water tower that Frank has fought to keep. Somehow the county commissioner, a bitter rival of Frank’s, wants to pin this girl’s death on him. Clearly only the girl is at fault, but we all know how crazy and gullible people can be, and political careers have ended over dumber things. Other things that happened, on a scale of mildly interesting to could-not-care-less: Zoe lets her national profile inflate her ego and flirts with Frank, Peter and Christina attempt to be more honest with one another, and Claire tries to hire an ailing activist.

I could blame this on the wedding I attended this weekend, but this is all on me having too many other things going. If I can’t catch up next week, I’ll only be doing two episodes a week from here on out.

“Cliff Gardner” (A-)
William H. Macy is the only actor on this series to be nominated for an Emmy. While that’s a disgrace on the Academy’s part for the snub, it’s not hard to see why he was shortlisted. Initially perceived as a disrupter and an interloper, his triumphant speech to the CSC suits bent on removing Isaac and dumbing down the show reveals he’s on our beloved team’s side. It’s terrific.

“Louise Revisited” (B)
The stop-and-go nature of Dana and Casey’s relationship can often be frustrating, but that’s only because you root for both of them so much. This episode’s definitely a step-down from the previous installment’s brilliant speechifying that is Sorkin’s bread-and-butter. This season is messy, but it’s working its way out of the corner it’s painted itself into with some poise. 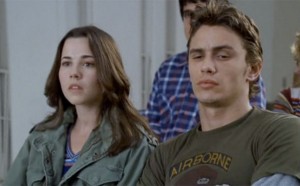 “Beers and Weirs” (A)
Ah, throwing a party while the parents are out of town. It’s been done to death, yet Freaks and Geeks finds a way to dig deep into each character’s (sometimes conflicting) motivations. While some strange and uncomfortable stuff happens, nothing ever gets too out of hand. Even so, the episode is engaging from beginning to end. The show manages to show the full range of emotions high schoolers experience without ever getting whiny. That’s what I love about it and why, only two episodes in, I’m ready to declare it one of my favorite shows of all time. Is it too early to say that? Who cares! I’m in love! 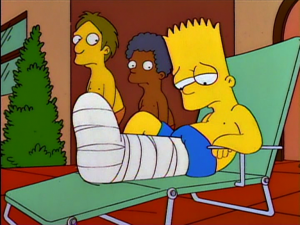 “Bart of Darkness” (A)
Though by this time it had become a comedy institution—signified by the lack of fearlessness that was once the series’ trademark—this is an all-time classic parody episode. It’s also the perfect kick-off to summer. The Simpsons would still be both uproarious and sweet, but this was the first season where the blend wasn’t quite as potent. Now let us celebrate this arrangement with the adding of chocolate to milk. 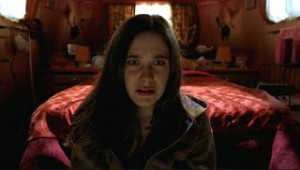 “Wax Lion” (B+)
The show had all the makings of a cult show: snarky protagonist, colorful cast of characters and enough quirkiness to drown the entire Buffalo metro area. Set at a Niagara Falls gift shop, the utterly adorable Caroline Dhavernas stars as a Brown alumna stuck working a minimum-wage job. The what-do-I-do-with-my-life angle would be enough, but the trinkets at her shop start talking and giving her advice. That was probably enough to turn all but the most patient viewers off after the first episode and led to its early demise. But stick around and you’ll find one of the coziest shows on TV, with a group of people who have lots of layers beneath their defining traits. 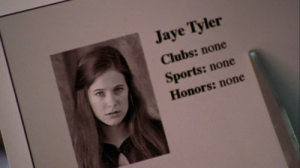 “Pink Flamingos” (B)
Though there’s some added sweetness thanks to a last-minute heartfelt speech, the show is already starting to repeat itself with all of the arranged coincidences leading to romance and/or hook-ups. Surely there’s something deeper than all that? Still, Dhavernas manages to play her precarious role perfectly: She doesn’t care, but she really does, but doesn’t want anyone to know that she cares. It’s a tightrope walk, but so far she’s pulling it off. I’ll be covering one episode a week from here on out.

Note: Coverage of The Office (UK) has been postponed indefinitely. Sorry!