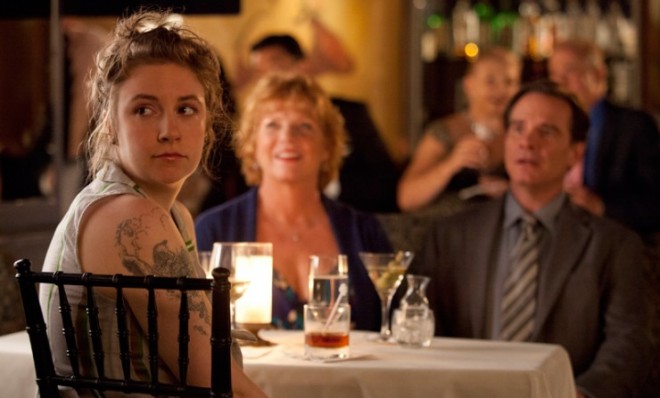 This episode is all about characters doing things completely outside their normal M.O. Most of these feel like they come out of nowhere, to the detriment of the show. But Adam’s storyline is so good that it overshadows any confusion caused by these out-of-nowhere revelations.

The elephant in the room about this is Hannah’s OCD. Given Hannah’s personality, some form of mental illness always seemed likely, but this truly feels dropped in out of nowhere. (I’m reading in reviews there have been hints toward this before, but this just means it was poorly sketched out, and magnifying it here takes away from a better story. This was the problem in “Video Games” as well.)

While this new development bothered me, I still liked the way it played out, like Hannah’s meltdown during a terrific Judy Collins concert and her tête-à-tête with her old therapist (Bob Balaban). She really does have supportive parents, even if her mom can be a total heel sometimes. But sometimes you just want to shake Hannah, because she refuses to acknowledge any problems in her life, or if she does, immediately places blame on someone else. She’s become the most frustrating character on the show and, as with last week, it makes me wish this would be relegated to the sidelines because it’s taking away from a much better story.

That better story is Adam’s newfound love. After revealing some very personal recent history at an AA meeting, one of his fellow alcoholics-in-recovery (guest star Carol Kane) gives him her daughter’s number, because he seems to be getting it together, and she finds his honesty refreshing. Turns out her daughter is a knockout (Shiri Appleby) who happens to have the hippest job of any cast member: assistant to a private eye. Yet their attraction and romance seems utterly genuine, which has not always been the case with this show. I want more of this and less of Hannah’s issues, even if it’s still her show.

The last two WTF moments were brief, but still a little confusing. So, apparently, Marnie wants to be a singer? That’s new and doesn’t exactly fit anywhere, but I’m willing to give it a shot because I’ve become so sympathetic to Marnie, even if she’s delusional (yeah, it’s Charlie who doesn’t have it all together but you do). Ray, again, is the MVP of this episode.

The other moment that had me scratching my head? Shoshanna hooking up with that doorman. While this makes a little more narrative sense, I still find it that someone who tries to be rational and pure-hearted would do something so reckless. Still, I totally get that she feels trapped and old and boring with Ray, even if they are still in love.

If it’s not careful, this show will paint itself into a corner. There are two episodes to find its way out.

Bitch of the week: The A.A. meeting leader, who’s very disgruntled at his fellow alcoholics-in-recovery who never sign up to bring cookies.

Best fashion choice: The shimmery dress on the always glamorous Judy Collins. I really need to listen to more of her music.

“What’s a girl like you doing in a place like this?” (for a character who barely makes an appearance): Jessa, who will likely be out for the rest of the season due to Jemima Kirke’s pregnancy.