The Emmys are in two weeks. I know in past years I haven’t posted that much about them, but in expanding my critical horizons, they need to be discussed. Here’s a full-on category-by-category breakdown. The weekend of the ceremony (Sept. 17-18), we’ll regroup–in less detail–to see if anything’s changed. 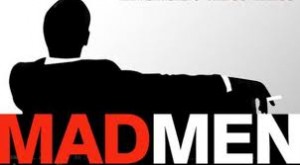 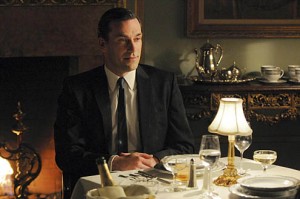 BEST ACTOR IN A DRAMA SERIES
Steve Buscemi, Boardwalk Empire
Kyle Chandler, Friday Night Lights
Michael C. Hall, Dexter
• Jon Hamm, Mad Men
Hugh Laurie, House
Timothy Olyphant, Justified
Thoughts: Bryan Cranston has dominated this category since Breaking Bad began. But the show just started a few weeks ago, meaning he won’t win again till next year. This is the perfect—and perhaps only—opportunity for Hamm to pick up his first trophy. In fact, everyone here has yet to win an Emmy, so I’d be pleased no matter whose name is called next month. 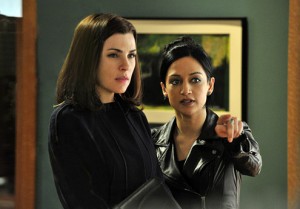 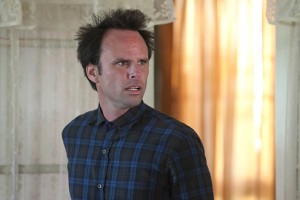 BEST SUPPORTING ACTOR IN A DRAMA SERIES
Andre Braugher, Men of a Certain Age
Josh Charles, The Good Wife
Alan Cumming, The Good Wife
Peter Dinklage, Game of Thrones
• Walton Groggins, Justified
John Slattery, Mad Men
Thoughts: Braugher is one of the best television actors of the last decade, yet hasn’t won an award in a while. Like Tony Shalhoub, I’d be OK if he won year in, year out. But this is a category that shifts year-to-year with no dominant force. That means everyone has a fairly equal shot. I’d say it comes down between the diminutive Dinklage or the volatile Groggins, who both add an element to their respective shows that would be sorely absent without them. 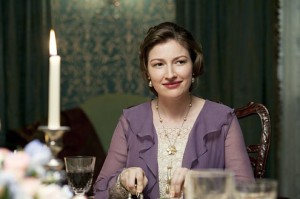 BEST SUPPORTING ACTRESS IN A DRAMA SERIES
Christine Baranski, The Good Wife
Michelle Forbes, The Killing
Christina Hendricks, Mad Men
• Kelly MacDonald, Boardwalk Empire
Margo Martindale, Justified
Archie Panjabi, The Good Wife
Thoughts: Another wide-open race. I enjoyed MacDonald’s performance a lot—she’s that show’s secret weapon. That’s good enough to declare her the front-runner, but there’s a serious possibility Martindale could sneak away with this, much like Aaron Paul did in the supporting actor category last year. I also wouldn’t count out Baranski. 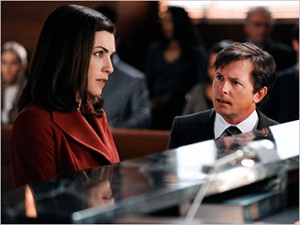 BEST GUEST ACTOR IN A DRAMA SERIES
Beau Bridges, Brothers & Sisters
Jeremy Davies, Justified
Bruce Dern, Big Love
• Michael J. Fox, The Good Wife
Paul McCrane, Harry’s Law
Robert Morse, Mad Men
Thoughts: Davies was the perfect guest star for that gritty show, and he’s an underrated actor, so any awards ultimately boost his profile. But is there anyone that can out-do the goodwill Fox has? No way. 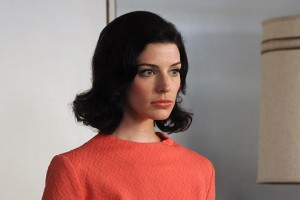 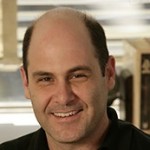 BEST COMEDY SERIES
30 Rock (NBC)
The Big Bang Theory (CBS)
Glee (Fox)
• Modern Family (ABC)
The Office (NBC)
Parks and Recreation (NBC)
Thoughts: Modern Family, despite being a little inconsistent this season, is still the far-and-away front runner. The other shows have their fans, but I don’t recall any episode from the others that really caused such a stir. A win for Parks & Rec is the most meaningful, which would hopefully transfer to more viewers next season. 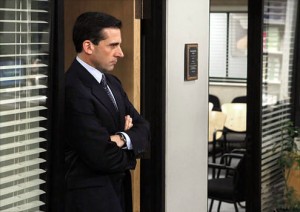 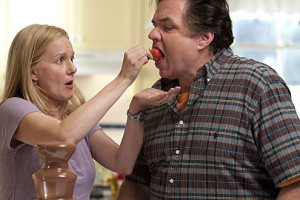 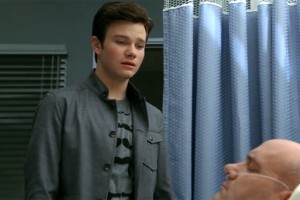 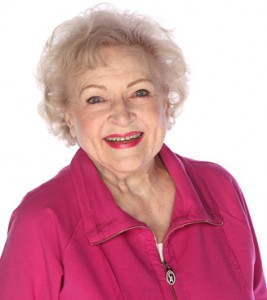 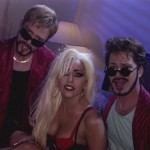 BEST GUEST ACTOR IN A COMEDY SERIES
Will Arnett, 30 Rock
Matt Damon, 30 Rock
Idris Elba, The Big C
Zach Galifianakis, Saturday Night Live
Nathan Lane, Modern Family
• Justin Timberlake, Saturday Night Live
Thoughts: Timberlake is the highlight of the season every episode he does. But Nathan Lane could also win here, as the flamboyant and ridiculously named Pepper Salzman. But where is Mike O’Malley? He’s easily the best thing on the train wreck that is Glee. 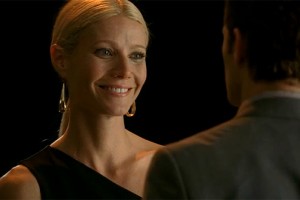 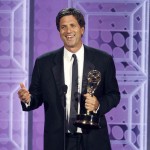 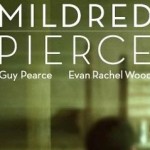 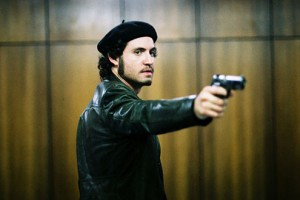 BEST ACTOR IN A MINISERIES OR MOVIE
Idris Elba, Luther
Laurence Fishburne, Thurgood
William Hurt, Too Big to Fail
Greg Kinnear, The Kennedys
Barry Pepper, The Kennedys
• Edgar Ramirez, Carlos
Thoughts: A stacked category filled with real-life characters, this is a tough race to call. But I expect Edgar Ramirez, who starred in the six-hour account of the ’70s most infamous terrorist, to win here. 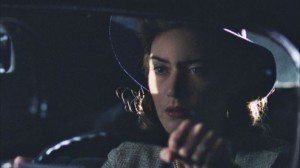 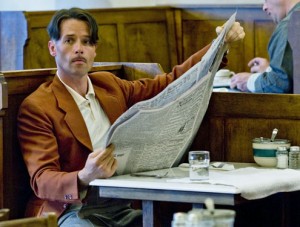 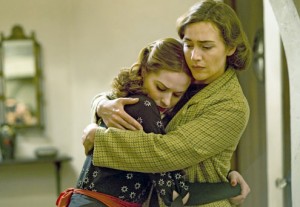 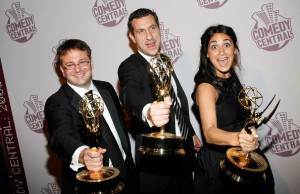 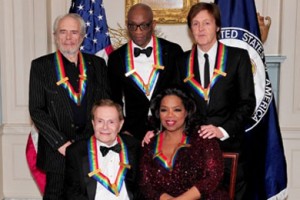 BEST VARIETY/MUSIC/COMEDY SPECIAL
Bette Midler: The Showgirl Must Go On (HBO)
Carrie Fisher in Wishful Drinking (HBO)
Lady Gaga Presents the Monster Ball Tour: At Madison Square Garden (HBO)
• The Kennedy Center Honors (CBS)
The Pee-Wee Herman Show on Broadway (HBO)
Thoughts: My love Pee-Wee is out in the open, but the Emmys are still quite a boring lot, and I expect the snoozy Kennedy Center Honors special to win. But don’t discount the Divine Miss M. The recording of her Vegas finale is top-notch. 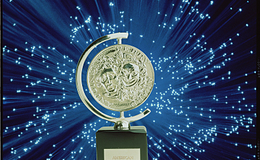 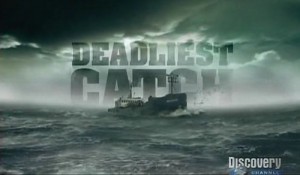 BEST REALITY COMPETITION PROGRAM
The Amazing Race (CBS)
American Idol (Fox)
Dancing with the Stars (ABC)
Project Runway (Lifetime)
So You Think You Can Dance (Fox)
• Top Chef (Bravo)
Thoughts: Top Chef ended last year’s Amazing Race streak. I don’t watch any of these shows, so from my end, they all have an equal shot. But why buck the trend? Chef will remain a cut above the rest to Emmy voters.

BEST HOST FOR A REALITY OR REALITY COMPETITION PROGRAM
Tom Bergeron, Dancing with the Stars
Cat Deeley, So You Think You Can Dance
Phil Keoghan, The Amazing Race
• Jeff Probst, Survivor
Ryan Seacrest, American Idol
Thoughts: Probst has won this category every year since its inception. It’ll stay that way.

BEST ANIMATED PROGRAM
The Cleveland Show (Fox)
Futurama (Comedy Central)
Robot Chicken: Star Wars—Episode III (Cartoon Network)
The Simpsons (Fox)
• South Park (Comedy Central)
Thoughts: The nominated episode for The Simpsons (“Angry Dad: the Movie”) was one of the sharpest in recent years and explored different animation techniques in its parody of the film industry. But as a reward for continued satire, and as a make-up for honoring a Christmas special over last year’s brilliant, extremist-baiting “200/201,” South Park will win again.

This entry was posted in Awards, Television. Bookmark the permalink.