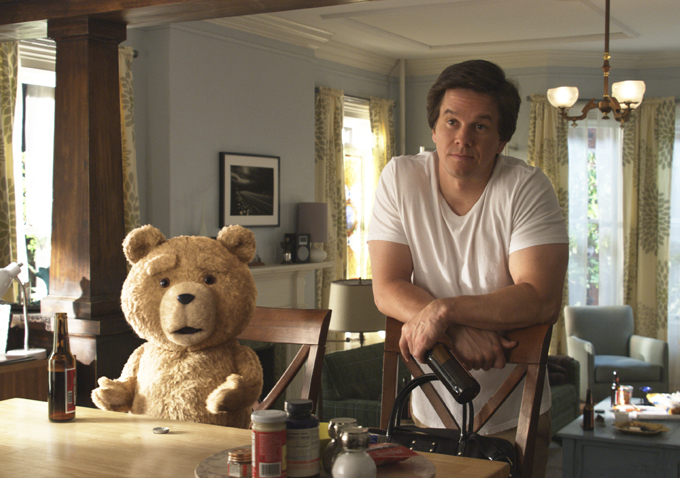 “We’d just be idiots spouting nonsense.” And thus no line of dialogue has ever summed up its movie quite so well. (Universal)

Sometimes, you get a movie all wrong. You think it’s going to be a horrible bomb that can’t possibly succeed on any level. Then you actually see the thing and it turns out to better than you could have possibly thought. Ted is just such a movie.

Part of its success is its commitment to the story. There’s no questioning why the bear talks or its purpose here. Ted is just another character in this story. He’s Teddy Ruxpin with a bong, but he’s also an irrelevant ’80s relic.

His best friend is John (Mark Wahlberg, proving again he should stick to comedy for awhile), who wished him to life at eight years old. Now, they’re both older slackers, and John’s girlfriend Lori (Mila Kunis) thinks their relationship is stifling because of Ted’s frat-boy influence. Bromance between man-children causing romantic strife? That should be played out by now, but MacFarlane and his writers keep it fresh, even when falling back on Family Guy-style cutaways (that’s when the joke flashes back after a character says, “Remember when…”) and pop-culture references.

Fortunately, there aren’t too many of those, and one in particular is a sort of parody/homage to Airplane! that works, again, because everyone’s so committed to it.

But make no mistake, Ted is a really stupid movie. One that’s funny and filthy, but isn’t after anything substantial. (A subplot involving a creepy collector is just an excuse to use up any remaining out-there jokes the writers still want to use.)

Like all bromantic comedies, this one follows all the beats it’s required by law to do, but has a lot of naughty fun hitting them along the way.

It’s hard to see how Ted could have been any better than it is. If you see only one raunchy comedy about a talking bear this year, make it this one.