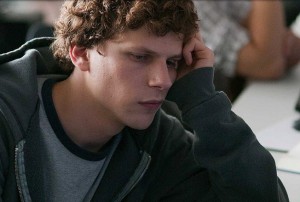 How rare is it that we get a film that excels on every possible level, one that’s virtually flawless. The Social Network is one of those beauties.

This is that once-in-a-blue-moon project where the acting is great without exception, the writing is unbelievably smart, the direction is obscenely well-done, the music fits perfectly with every scene, and then every technical aspect also happens to be wonderful. It’s almost sickening how good this movie is.

The movie begins much like last year’s Inglourious Basterds, with villain and victim talking at a table, trying to hide their vulnerabilities. Mark Zuckerberg (Jesse Eisenberg acting on another level entirely) and his girlfriend Erica (Rooney Mara) drink at a crowded Boston pub, as Erica patiently tries to put up with Mark’s verbal gymnastics and condescension (“You go to B.U.,” the Harvard undergrad says). After numerous insults–this likely isn’t the first time they’ve fought likes this–she ends their relationship, making sure he knows just what she thinks of him before she goes.

And so the petty, relentless, brilliant Mark heads off into the snow, back to his dorm to drunkenly blog about Erica, deriding her family’s heritage and small breasts. Then he gets an idea: What if we started comparing all the women of Harvard, letting students decide who’s hottest? After some clever hacking, Facemash is born. The site becomes so popular, it crashes the school’s servers.

Even in these early scenes, with Mark blathering on about coding (his true love), the film is never boring or hard to understand. Credit Sorkin’s razor-sharp script for that.

Mark is a man driven to be noticed. While everyone wheres designer suits and Polo shirts, Mark wears hoodies and Adidas sandals everywhere, regardless of the temperature. His reputation is everything, which is why he’s insulted when twins Cameron and Tyler Winklevoss (both played brilliantly by newcomer and walking Abercrombie advertisement Armie Hammer) think his needs saving after he’s disciplined for creating Facemash.

The twins and their business partner (Max Minghella) promise a gateway to exclusive, elite clubs in Harvard (which is everything to everyone at the school, especially Mark who would have no chance of getting in by himself). If he helps them build their Harvard Connection website, he could be a part of their world. Yet Mark immediately starts work on Facebook, which may or may not have used their idea.

From this point on, the film jumps back and forth between the origin story and two separate depositions, both involving people Mark may or may not screwed out of a fortune as he went on his way to becoming the world’s youngest billionaire.

The first of those lawsuits is obviously from the Winkelvoss twins (or Winkelvi as the smart-aleck Zuckerberg calls them) and their business partner. But the other comes from Mark’s best friend and co-founder Eduardo Saverin (Andrew Garfield, well on his way to becoming one of the best actors of his generation), the only person who works nearly as hard as Mark but maybe isn’t the best person to take the website as far as it can.

Enter Justin Timberlake as Napster founder Sean Parker, who doesn’t have the financial savvy Eduardo has, but is, as Eduardo puts it, “a wild card.” While Eduardo sees Facebook as just another business venture, Sean sees it as a revolution. And like all revolutionaries, he’s brilliant but dangerous.

Timberlake is undeniably good as the Devil on Mark’s shoulder, who encourages him to move his offices from Cambridge to Palo Alto, to pull revenge stunts on investors who backed out, to drop the “the” from the web address. But all his schemes translate to success. Sean may have a taste for cocaine and college girls, but a fool he is not.

This is a movie filled with betrayals, a mark of our win-at-all-costs culture. This is a terrifying parable for our disconnected age. It’s a cruel irony that a man with more friends than anyone likely has no friends at all. But to paraphrase the film’s final lines, Mark wasn’t an a-hole. He just tried really hard to be.