Ender’s Game* (PG-13)
Starring Asa Butterfield, Hailee Steinfeld, Harrison Ford
Written for the screen and directed by Gavin Hood
Despite feeling a little rushed, because it has to cram so much mythology in less than two hours, it still works as a sci-fi film in its own right. And that twist still packs an emotional wallop. Read my full review at College Movie Review.

Free Birds (PG)
Starring the voices of Woody Harrelson, Owen Wilson, Amy Poehler
Story by David I. Stern & John J. Strauss
Screenplay by Jimmy Hayward & Scott Mosier
Directed by Jimmy Hayward
An outsider studio tries its hand at the fall animation game. This one features two turkeys (Harrelson and Wilson) separated by ideology. So it’s kinda like Magneto and Professor X. I have to personally wish this film success as one of my oldest friends worked on this one.

About Time (R)
Starring Domhnall Gleeson, Rachel McAdams, Bill Nighy
Written and directed by Richard Curtis
There are now not one but two movies where Rachel McAdams has a time-travelling boyfriend. With Richard Curtis (Love Actually) at the helm, this one will surely be better.
PLAYING AT THE MAGNOLIA

Blue is the Warmest Color (NC-17)
Starring Léa Seydoux, Adele Exarchopoulos, Salim Kechiouche
Written for the screen by Abdellatif Kechiche & Ghalia Lacroix
Directed by Abdellatif Kechiche
The film surprisingly won the Palme d’Or at Cannes. It’s a three-hour drama about a lesbian couple’s ups and downs. But the acting apparently makes it feel like it flies by.
PLAYING AT ANGELIKA PLANO and THE MAGNOLIA

All is Lost (PG-13)
Starring Robert Redford
Written and directed by J.C. Chandor
That’s not an omission. Robert Redford is the only actor onscreen. He gets stuck in a storm during a solo fishing trip. An Oscar nomination is definitely in his future.
PLAYING AT THE MAGNOLIA

Diana (PG-13)
Starring Naomi Watts, Naveen Andrews, Douglas Hodge
Written for the screen by Stephen Jeffreys
Directed by Oliver Hirschbiegel
While there’s plenty of great, compelling drama to be mined from the life of the Princess of Wales, the buzz from the UK was deadly. Reminds me of another lousy biopic on an important British figure.
PLAYING AT ANGELIKA DALLAS 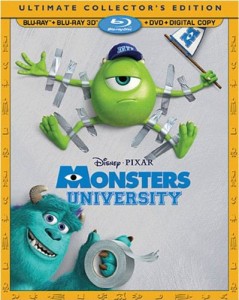 Monsters University (78%)
Pixar haters can suck it. No movie brought me as much joy this year as this prequel. Plus, dare I say it, it’s a bit inspirational.

To buy:
Music: Philip Glass: The Perfect American, Springsteen & I