Underworld: Awakening (R)
Starring Kate Beckinsale, Stephen Rea, Michael Ealy
Story by Len Wiseman
Screenplay by Len Wiseman & John Hlavin and J. Michael Straczynski and Allison Burnett
Directed by Mans Marlind, Bjorn Stein
Unless you’re my uncle Mitch, is there any way you’re excited about this? Beckinsale returns to play the vampire Selene for the first time in six years (there was that awful prequel in 2009), this time in 3-D. Like I said, I can’t imagine anyone being the least bit excited about this, yet it will somehow open No. 1 at the box office. This is definitely your archetypal terrible January release.

Haywire (R)
Starring Gina Carano, Ewan McGregor, Bill Paxton
Written by Lem Dobbs
Directed by Steven Soderbergh
Despite the solid cast (which also includes Antonio Banderas and Michael Fassbender) and filmmaker’s background (they collaborated on the criminally underrated the Limey), I really can’t muster any enthusiasm for this female Bourne rip-off, even if Soderbergh will find some way to make it work. Carano’s inexperience as an actor—she’s an MMA fighter and frequent lad mag fodder—worries me most of all.

Red Tails (PG-13)
Starring Cuba Gooding Jr, Michael B. Jordan, Terrence Howard
Story by John Ridley
Screenplay by John Ridley and Aaron McGruder
Directed by Anthony Hemingway
Sadly, African-Americans are criminally under-represented in Hollywood. The few films that are marketed toward them are usually lowest-common denominator comedies from the likes of Tyler Perry. So Red Tails should be cause for celebration, as it features an all-black cast (plus Bryan Cranston, because the man must be in every movie from here on out), a black director and two black Hollywood outsiders writing the script. But this historical action epic about the Tuskegee Airmen has all been covered before—without George Lucas’s green screen—in countless other films, most notably by HBO in 1995.

Extremely Loud and Incredibly Close (PG-13)
Starring Thomas Horn, Sandra Bullock, Tom Hanks
Written for the screen by Eric Roth
Directed by Stephen Daldry
Thanks to an odd release schedule and critical vitriol, Extremely Loud all but missed the Oscar boat (it could still pull off a nomination or two next week). But I still hold out hope that this adaptation of Jonathan Safren Foer’s novel will be a moving experience. Thomas Horn (a Hollywood newcomer and former Jeopardy! Champ) plays Oskar, who tries to uncover clues to a secret his father (Tom Hanks) left behind. Expect plenty of emotional scenes as Oskar and his mom (Sandra Bullock) and other New Yorkers reminisce over what they lost on 9/11. Daldry is hardly my favorite director (don’t bring up the Reader around me unless you want an earful), but I think he pulls this one off.

Also opening:
The Artist * expands into wide release in anticipation of its guaranteed Oscar nominations 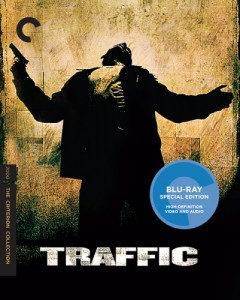 Traffic (Criterion Collection)
Before Soderbergh made Ocean’s team a franchise and directed MMA stars, he became the first director since Michael Curtiz to receive two Best Director nominations in the same year. He won for this multi-layered take on the drug trade. It’s a borderline exhausting film, but one of incredible vision and execution. If you have trouble finding the Criterion DVD of the film from 2002, or if you’re upgrading to Blu-ray, this is essential viewing. Blu-ray and the Criterion Collection were made for each other.