The Weekender: O ‘Captain,’ My Captain

Captain Phillips (PG-13)
Starring Tom Hanks, Barkhad Abdi, Catherine Keener
Written for the screen by Billy Ray
Directed by Paul Greengrass
Tom Hanks is in the midst of a creative resurgence. One of his smartest decisions was having Paul Greengrass (The Bourne trilogy, United 93) lead the way with this true life horror story about the U.S. captain of a freighter taken over by Somalian pirates. Advance word is this is his best performance ever, and you know that’s saying something.

Machete Kills* (R)
Starring Danny Trejo, Demian Bichir, Mel Gibson
Story by Robert & Marcel Rodriguez
Screenplay by Kyle Ward
Directed by Robert Rodriguez
Just as gruesome and hilarious as its predecessor, but it’s often repetitive. Still, Mel Gibson and Demian Bichir save it with their completely nutso performances. See it for them. Read my full review at College Movie Review.

We are What We Are (R)
Starring Bill Sage, Ambyr Childers, Julia Garner
Written by Nick Dimici & Jim Mickle
Directed by Jim Mickle
Surely the creepiest-looking film of the year, We are What We Are tells the tale of the disturbing Parker family, who find their off-the-grid lifestyle upended after a major storm.
PLAYING AT ANGELIKA DALLAS

Escape from Tomorrow (NR)
Starring Roy Abramsohn, Elena Schuber, Katelynn Rodriguez
Written and directed by Randy Moore
Here’s one I’ve been excited about for a long time, but never thought I’d get a chance to see. Escape from Tomorrow is a horror flick that was filmed covertly at Disneyland. Thanks to some clever editing, it’s finally being released without incident.
PLAYING EXCLUSIVELY AT THE TEXAS THEATRE 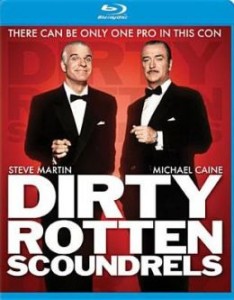 Dirty Rotten Scoundrels
One of the most frequently watched films in the Mooney household is this ’80s gem featuring Steve Martin and Michael Caine as dueling con artists. You just can’t beat this duo, especially when the former slips into his Rupert character.

To buy (click the link to watch on Netflix):
Music: Ain’t in it for My Health: A Film About Levon Helm

Blu-ray: Airplane II: The Sequel, Corruption, Fantastic Voyage, House on Straw Hill, Internal Affairs, Monty Python’s Meaning of Life, On the Riviera, Shout at the Devil, Stalag 17, Tomb Raider: The Cradle of Life, Voyage to the Bottom of the Sea

Criterion: I Married a Witch

This entry was posted in Film, Previews and tagged acod, adam scott, captain phillips, concussion, escape from tomorrow, hailee steinfeld, halloween, inevitable defeat of mister and pete, jennifer hudson, jessica alba, machete kills, romeo and juliet, tom hanks, we are what we are. Bookmark the permalink.