The Weekender: Let’s be ‘Frank’

The Possession (PG-13)
Starring Jeffrey Dean Morgan, Kyra Sedgwick, Natasha Calis
Written by Juliet Snowden & Stiles White
Directed by Ole Bornedal
Stay away from yard sales, because you might just end up with a haunted box! Read my review at College Movie Review.

The Oogieloves in the Big Balloon Adventure (G)
Starring Jaime Pressley, Chazz Palminteri, Cloris Leachman
Screenplay by Scott Stabile
Directed by Matthew Diamond
What. In. The. Hell. Is. This?

Cosmopolis (R)
Starring Robert Pattinson, Juliette Binoche, Mathieu Amalric
Written for the screen and directed by David Cronenberg
After getting some Oscar attention for his two most successful projects in quite a while, reception turned frosty for his clinical take on Freud and Jung’s rivalry. Undeterred, he cast a matinee idol in his adaptation of Dom DeLillo’s best-seller about one-percenter ennui. Critics are sharply divided, which means, unlike most directors, Cronenberg is still getting a reaction out of people.
PLAYING AT BOTH ANGELIKAS

For a Good Time, Call… (R)
Starring Ari Graynor, Lauren Miller, Justin Long
Written by Lauren Miller & Katie Anne Naylon
Directed by Jamie Travis
It’s the sexiest comedy of 1992! Oh, it’s 2012? Then this comedy about roommates starting a phone-sex line sure seems quaint, doesn’t it? Still, Ari Graynor needs to be a star. If this out-of-date Sundance hit turns out to be her ticket to fame, more power to her.
PLAYING AT THE ANGELIKA DALLAS and CINEMARK WEST PLANO

Sleepwalk with Me* (NR)
Starring Mike Birbiglia, Lauren Ambrose, Carol Kane
Written for the screen by Mike Birbiglia & Joe Birbiglia & Ira Glass & Seth Barrish
Directed by Mike Birbiglia & Seth Barrish
To borrow an oft-used quote from Peter Travers, but this autobiographical comedy is genuinely “hilarious and heartfelt.” I’m a big fan of Birbiglia’s stand-up comedy and I’ve read the book this movie is based on. Whether you’re a long-time fan or this is your first exposure to the Boston comedian, you’ll enjoy yourself immensely. Look for a review next week.
PLAYING EXCLUSIVELY AT THE ANGELIKA DALLAS

Robot & Frank (PG-13)
Starring Frank Langella, Susan Sarandon, James Marsden
Written by Christopher D. Ford
Directed by Jake Schreier
A robot butler (voiced by Peter Sarsgaard) and a retired jewel thief (Langella) team up for one last heist. Of course I’m on board for this one.
PLAYING AT THE ANGELIKA PLANO and THE MAGNOLIA

Red Hook Summer (R)
Starring Jules Brown, Clarke Peters, Toni Lysaith
Written and directed by Spike Lee
Spike Lee heads back to Brooklyn for this tale about a boy who lives with his pastor grandpa in the projects for a season. No one at Sundance was particularly enthused, and neither am I. Even if it’s not a worthwhile trip, at least he’ll be taking a break from nearly starting riots via Twitter.
PLAYING EXCLUSIVELY AT THE TEXAS THEATRE

Highland Park Village: It is No Dream: The Life of Theodor Herzl (NR) 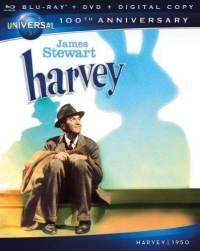 Harvey
Both Hollywood and Broadway have submitted remakes and revivals, but nothing comes close to touching the genuine hilarity and heart of this comedy. To me, Jimmy Stewart was never been better than he was here, and that’s really saying something. He plays the charming Elwood P. Dowd, whose best friend happens to be an invisible rabbit. Whether that’s mental illness or a side effect of a man who’s uncommonly nice and decent, you’ll have to decide for yourself.

To buy:
Music: The Beach Boys: Doin’ it Again