The Weekender: It’s not so ‘Impossible’

Texas Chainsaw (R)
Starring Trey Songz, Alexandra Daddario, Dan Yeager
Story by Stephen Susco and Adam Marcus & Debra Sullivan
Screenplay by Adam Marcus & Debra Sullivan and Kirsten Elms
Directed by John Luessenhop
Sigh. It’s January, folks. So get ready for lots of crap like this. This one feels especially lazy. They don’t even include the word Massacre, so it sounds like this is just a 3-D movie about a chainsaw from Texas.

The Impossible (PG-13)
Starring Ewan McGregor, Naomi Watts, Tom Holland
Story by Maria Belon
Screenplay by Sergio G. Sánchez
Directed by J.A. Bayona
Bayona’s tale of the 2004 Indian Ocean Tsunami is responsible for one of the trailers that made me get misty. Seriously, watch the video above and see if your heart doesn’t immediately melt.
PLAYING AT BOTH ANGELIKAS

Promised Land (R)
Starring Matt Damon, Rosemarie DeWitt, John Krasinski
Story by Dave Eggers
Screenplay by John Krasinski & Matt Damon
Directed by Gus Van Sant
Despite boasting a great cast that also include Frances McDormand and Hal Holbrook, Promised Land looks like a gigantic waste of time. The utterly predictable storyline finds a cynical salesman trying to get a small town to sell its natural-gas drilling rights. It’s supposed to be easy but then there are protests and maybe we shouldn’t be raping the land from these noble people. Hmm…
PLAYING AT BOTH ANGELIKAS

The Comedy (NR)
Starring Tim Heidecker, Eric Warheim, James Murphy
Written by Rick Alverson, Robert Donne, Colm O’Leary
Directed by Rick Alverson
Though this black comedy stars Tim and Eric, it contains none of their absurdist style. Instead, this is an exercise in uncomfortable moments and 20-something trust funder ennui. In other words, the kind of movie I would hate with the passion of a thousand fiery suns. As Dr. Evil once said, “There’s nothing more pathetic than an aging hipster.”
PLAYING EXCLUSIVELY AT THE TEXAS THEATRE 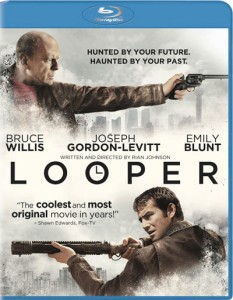 Looper (94%)
One of the best movies of the year only gets better on repeated viewings. Rian Johnson’s sci-fi masterpiece was one of the year’s only truly original movies and it’s terrific as both an action movie and the existential piece of work it eventually becomes. Not much else to write about, as I’ve written about it extensively on this site. Basically, if you like great movies, it’s essential to own.