The Weekender: I’m on ‘Fire’

The Hunger Games: Catching Fire (PG-13)
Starring Jennifer Lawrence, Josh Hutcherson, Liam Hemsworth
Written for the screen by Simon Beaufoy and Michael Arndt
Directed by Francis Lawrence
The sequel to the massively popular original, which made more than any single Harry Potter film, should dominate the box office for weeks to come. Hopefully, though, they remembered to bring some brains to the table.

Delivery Man (PG-13)
Starring Vince Vaughn, Chris Pratt, Cobie Smulders
Screenplay by Ken Scott
Directed by Ken Scott
French-Canadian Scott re-directs his own Starbuck, about a working-class guy being sued by his 500-plus kids from his donation to a fertility clinic.

The Christmas Candle (PG)
Starring Hans Matheson, Samantha Barks, Lesley Manville
Written for the screen by Candace Lee & Eric Newman
Directed by John Stephenson
As I’ve written before, most Christian-themed films don’t interest me because they’re low quality, feature terrible writing and poor acting. But this film, from Rick Santorum’s EchoLight Pictures, might be a cut above. Based on Max Lucado’s period novel, it seems more Christmas Carol than Fireproof. Thank God for that.
PLAYING AT CINEMARK WEST PLANO

The Book Thief (PG-13)
Starring Sophie Nélisse, Geoffrey Rush, Emily Watson
Written for the screen by Michael Petroni
Directed by Brian Percival
Reviews and word-of-mouth for the book are all raves, but like a lot of films, something’s been lost in translation. Still, it’s got Nazis, so you know the Oscars are paying attention.
PLAYING AT ANGELIKA DALLAS and CINEMARK WEST PLANO

The Armstrong Lie (R)
Directed by Alex Gibney
Gibney’s second documentary this year focuses on another well-known egomanic, Lance Armstrong. There probably won’t be a lot here we don’t already know, but Gibney’s a fantastic filmmaker.
PLAYING AT ANGELIKA PLANO and THE MAGNOLIA 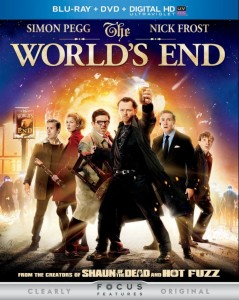 The World’s End (89%)
Few directors get me right where my intellect and pop culture obsessions collide (Wes Anderson is the only other one I can think of right now) like Edgar Wright. The co-creator of Spaced and director of Shaun of the Dead and Hot Fuzz caps his Cornetto Trilogy terrifically. It may go a little long – the epilogue in particular was unnecessary – but it earns all those points back by going a little deeper and darker into the friendship at its core. Simon Pegg and Nick Frost are, of course, magnificent.