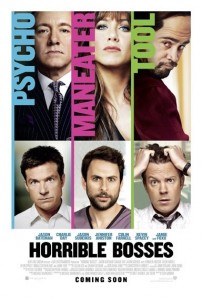 Horrible Bosses
Starring Jason Bateman, Jason Sudeikis, Charlie Day
Story by Michael Markowitz
Screenplay by Michael Markowitz and John Francis Daley & Jonathan Goldstein
Directed by Seth Gordon
Now this is the kind of movie I’ve been hoping for: a top-notch cast, a clever premise and a sharp script in a movie that’s strictly for adults. The three leads are both victims of truly awful superiors and, in a bit of dark desperation seek out a “murder consultant” (Jamie Foxx) to help each other remove the thorns in their side. But you know what they say about best laid plans. Still, I’m expecting a dark comedy that doesn’t skimp on either. 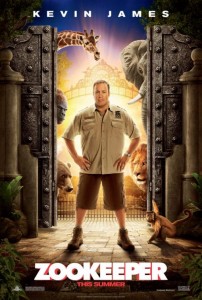 Zookeeper
Starring Kevin James, Rosario Dawson, Leslie Bibb
Story by Jay Scherick & David Ronn
Screenplay by Nick Bakay & Rock Reuben & Kevin James and Jay Scherick & David Ronn
If this movie opens at No. 1, I might just retire from film criticism because there’s basically no convincing the American public to stop seeing bad movies and watch good movies instead. James is a zookeeper who gets dating advice from the talking animals he takes care of. No, seriously. This is a travesty that should have never gotten the green light. I miss 2005 Kevin James, when he was a funny stand-up doing stellar sitcom work and had just made the ultimate traditional romantic comedy. Now he just takes pratfalls for money, like a pathetic clown instead of the vibrant comedian he used to be. Sad times.

AT HOME:
To rent:
· 13 Assassins
· Hobo with a Shotgun
· Winnebago Man

To buy:
Music: Deadmau5: Live at Earls Court
Blu-ray: Be Cool, The Cutting Edge, Das Boot, Don’t Be a Menace to South Central While Drinking Your Juice in the Hood, Honeymoon in Vegas, The Sacrifice
TV: Boy Meets World (Season 6), Southland (Season 2)

One Response to The Weekender: ‘Horrible’ indeed