The Weekender: A ‘Rose’ by any other name

Rosewater
Daily Show host Jon Stewart makes his directorial debut with this harrowing but frequently hilarious account of journalist Maziar Bahari’s time as a prisoner in Iran during the tumultuous 2009 elections.

WIDE RELEASE
• Beyond the Lights
• Dumb and Dumber To
• Saving Christmas 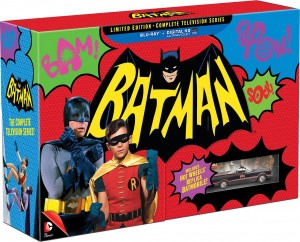 Batman (Complete Series)
After years in rights’ hell, the campy, groovy original Batman series comes to home video. Maybe you don’t need every episode of this series, which got more outlandish each season. But for nostalgia’s sake, this is a dream come true for me. My favorite episode is probably the two-parter with guest star Liberace, who plays both a world-class pianist and his twin brother, a crime boss. How does the latter try to kill Batman and Robin? By tying them to a machine that perforates sheet music for player pianos. I mean, how could you not love something so ridiculous?

This entry was posted in Film, Previews and tagged beyond the lights, dumb and dumber to, rosewater, saving christmas, way he looks. Bookmark the permalink.