When Arrested Development, arguably the most influential comedy of the last decade, premieres on Netflix this Sunday, it will attract more eyeballs than the show ever did during its three-season run. So any complaints about it being canceled too soon must be silenced. Fox, while not always fair or logical in its scheduling, continually took a chance on this show, just like NBC has done with Community.

Since going off the air in 2006, opposite the opening ceremonies of the Winter Olympics – a true sign its life was over – it’s more popular than it ever was while it was on the air. Its densely plotted episodes tend to blend together, no doubt due to the myriad YouTube compliations of chicken dances and Tobias’s malapropisms. That made picking its 10 best episodes exceedingly difficult. Thankfully, The A.V. Club rewatched every episode over the past few years and Noel Murray’s excellent reviews helped me wade through the richest sitcom ever made.

Without further ado, here are my choices for the top 10 episodes of Arrested Development. 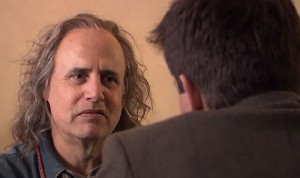 9. “Afternoon Delight” (Season 2, Episode 6)
How many dirty jokes can you handle in one episode? Because this episode, named after the lamest song about doin’ it ever recorded, is absolutely filthy. Buster plays The Banana Grabber, a raunchy version of The Hamburglar. Oscar explains his plan to calm Lucille down with pot-infused treats by saying, “I’ll put it in her brownie.” The show got away with all kinds of things that went over the censors’ heads, mostly by well-placed bleeps. GOB’s heavily edited speech on sexual harassment is one of the series’ best use of that gag, followed by GOB talking about his increasingly expensive suit, and how that eliminates him from being a decent human being. 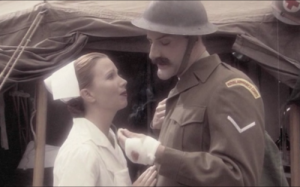 8. “Notapusy” (Season 3, Episode 4)
Even if the show had been renewed for a fourth season in 2006, the shortened third season would remain divisive among AD fans. Many fans were put off by Michael unknowingly dating a mentally retarded woman (Charlize Theron). I never thought the show was mean-spirited toward her (except for maybe the wax grape joke), and I loved Dave Thomas as her downright evil father (fitting, since he’s supposed to be British). The show heaps on the unwittingly gay jokes in this episode, with Tobias helping Ann win an Inner Beauty Pageant by promising to find her inner royalty and vowing to “out that queen.” Even more hilarious is George Sr. walking into the wrong Scared Straight tent to give a speech on prison life. 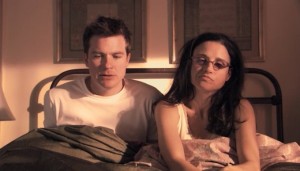 7. “Altar Egos” / “Justice is Blind” (Season 1, Episodes 17 & 18)
This two-parter showcases what AD was best at, where it beat every other sitcom: wordplay. If you’re a more high-minded viewer that can catch on Wilde-level puns and jokes, AD would have been your favorite sitcom of the last decade. There’s a lawyer pretending to be blind with a seeing eye dog named Justice who really is blind. There’s Maeby pretending to be disabled going by the name Shirley Fünke, who ends up “rolling” for school treasurer. And who can’t appreciate a musical where Captain Hook is on trial? 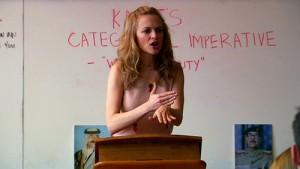 6. “Shock and Aww” (Season 1, Episode 14)
One of my earliest favorites from this show’s infancy, was this Andy Griffith-like episode (The AV Club first made this comparison). George Michael has a crush on his ethics teacher (guest start Heather Graham) but it’s Michael who actually makes the move on her. Yes, he debates the ethics of it, and of letting GOB take the fall for sleeping with her, even though he actually slept with the civics teacher (a much older lady who actually taught him in middle school). It’s that kind of misinterpretation that made this show so great. 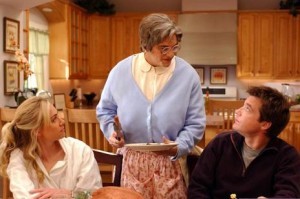 5. “The Immaculate Election” (Season 2, Episode 14)
Sometimes, life isn’t fair. George Michael is a nice kid and suited to run the student council. Steve Holt is (possibly) the bastard son of GOB on his third year as a senior. Which do you think will emerge victorious? But enough about life being a crushing defeat. Mrs. Featherbottom is here to make your life better with just a squirt of frosting down your throat. Now who would like a banger in the mouth? 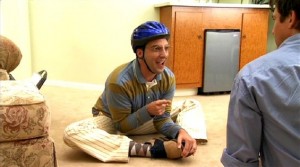 4. “Bringing Up Buster” (Season 1, Episode 3)
In my most recent re-watch, Buster has started to become my favorite character in the series. Like nearly every cast member, the show uses up its easiest jokes (in this case, Buster is a completely dependent mama’s boy) but then finds new ways to make him hilarious. 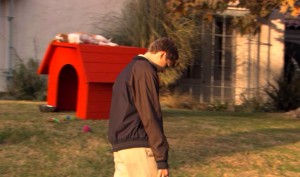 3. “Good Grief” (Season 2, Episode 4)
Wall-to-wall homages in this classic that makes the case that season two might be superior to season one. With plenty of reverence for Charles Schulz and great, timely gags about the Iraq War, this might be the most exemplary episode to explain what the show is all about. There’s even more verbal humor, as George Michael tells his dad he has “Pop-Pop” in the attic, meaning he’s aiding his fugitive grandfather, even though Michael takes it to mean his son is having clandestine sex with his Christian girlfriend and/or Tobias, which is the most terrifying joke the show ever implied. 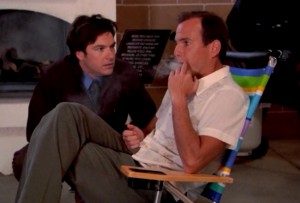 2. “Pier Pressure” (Season 1, Episode 10)
AD packed more plot and serialization in its seasons than any other comedy ever broadcast. This all-time classic introduced us to J. Walter Weatherman, who could always be brought in to teach an elaborate lesson about an ultimately trivial item. That’s why you always leave a note! And that’s why this was almost my No. 1 choice. 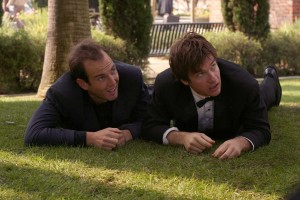 1. “Beef Consommé” (Season 1, Episode 13)
One of the many theses about the show was that it’s essentially about Michael, the golden child of the family, never getting what he wants, no matter how much he deserves it. So when he finally gets the blessing to start dating GOB’s (now ex) girlfriend Marta, it causes a fight in the courtroom and sends George Sr. straight back to jail. This may not be the absolute funniest episode of the series or the most bittersweet, but it’s always been my personal favorite that never fails to bring a smile to my face.