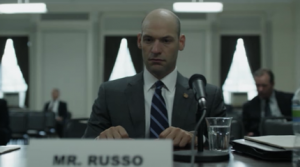 “Chapter Four” (A-)
We get down to business in this installment as Frank sacrifices a sheep that refused to become a wolf like him. The back-office dealings with Kevin Spacey are what I love about this show and there are plenty of moments here, including great facial expressions from everyone getting cornered by him. But there’s collateral damage too as Frank twists the knife in Peter’s back by keeping him from testifying to keep a naval shipyard in his district open. So much for Peter’s sobriety. And then there’s Zoe, using an expletive from her boss’s lips to gain even more power, only to give it up to Frank quite literally. The twists and turns keep me coming back, especially with an ending as powerful as this one. 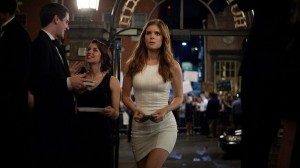 “Chapter Five” (B)
Less important events dominate this episode, as the teachers’ union lobbyist cuts the legs out from under his wife’s fundraiser by having the all-union staff at the hotel where she’s hosting go on strike. But Claire and Frank won’t let a little thing like no place to go ruin their evening, and they set up right outside, letting the sounds of protestors fuel their own manipulative drives. The way they serve the lobbyist his comeuppance is literally a dish best served cold. But again, the ending is absolutely fantastic. Corey Stoll finally steps it up a level to show he’s just as Emmy-worthy.

I didn’t realize a third hour of this show would be so hard to keep up with, and it kept snowballing from there. What’s killing me is still trying to keep up with Hannibal and Arrested Development, which are too good to put off. So the plan now is to watch at least two a week and, if there’s more time (like there should be next week), I’ll add at least another episode.

“Kafelnikov” (B+)
Much like Hannah’s sudden OCD in Girls, Dan’s sudden anxiety issues come out of nowhere. But on Sports Night, the mental illness is handled much more gracefully. It helps that Josh Charles continues to knock it out of the park. While the Y2K story dates this show in horrible ways, Joshua Malina continues to be fantastic as the overachieving Jeremy. And then there’s Robert Guilliame as Isaac to add some class to the proceedings with his reason not to fear the future: “I’m the managing editor of Sports Night. A hundred years ago I wasn’t allowed to vote.”

“Shane” (B+)
Did you know that sports sometimes actually play a crucial role in Sports Night? Here, Casey tries to defend the titular ballplayer, a new Yankees addition, after he slams the whole city of New York. But neither Dana nor Isaac will allow him to lose his journalistic integrity to help a friend, no matter how important he was. And the Dan stuff gets deeper, as he has a nervous breakdown while trying to pronounce Yevgeny Kafelnikov. This season is tough to love, but I think it’s figuring out where it wants to go. 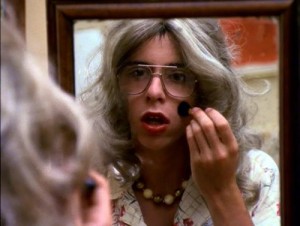 “Tricks and Treats” (A-)
Lost a half-step or two for being mostly slight, but then gains it back for taking down safety-obsessed parents. John Francis Daley’s performance as Sam is just heartbreaking in this episode, as his attempts to remain a kid end in public humiliation. Still, I think this is the funniest episode yet, mostly because Martin Starr is dressed as The Bionic Woman. 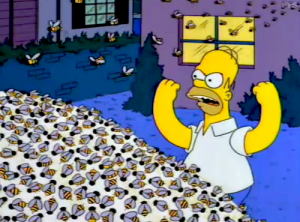 “Lisa’s Rival” (A)
Does an episode deserve a grade so high if the story isn’t among the best the show has ever done, but it contains some of the best lines ever said? If it was one or two, I’d say no. But “Lisa’s Rival,” which finds her sinking to “Bart-esque” levels to sabotage a classmate who’s superior to her in every way, contains nearly a dozen incredible quotes. It also features Bart running amok, trying to incite a riot, which is always funny and not used nearly enough. There’s also the divisive Homer selling sugar subplot, which I find just stupid and hilarious enough to work.

Here are some choice ones:

Milhouse, running from police: “Not again!”

Homer: “And you didn’t think I’d make any money. I found a dollar while I was waiting for the bus.”
Marge: “While you were out ‘earning’ that dollar, you lost forty dollars by not going to work. The plant called and said if you don’t come in tomorrow, don’t bother coming in Monday.”
Homer: “Woo-hoo! A four-day weekend!”

Announcer in Lisa’s dream: “And now, Avis Rent-A-Car is proud to present the second best band in America. Will you welcome Garfunkel, Messina, Oates, and Lisa singing their number two hit, ‘Born to Runner-up.’”

Taylor, Alison’s father: “I’m glad we have someone who can join us in our anagram game.”
Alison: “We take proper names and rearrange the letters to form a description of that person.”
Taylor: “Like, er…oh, I don’t know, uh…Alec Guinness.”
Alison: “Genuine class.”
Taylor: “Ho ho, very good. All right, Lisa, um…Jeremy Irons.”
Lisa: “Jeremy’s…iron?”
Taylor: “Mm hmm, well that’s…very good…for a first try. You know what? I have a ball. Perhaps you’d like to bounce it?”

Homer, about the bees: “They’re defending themselves somehow.” 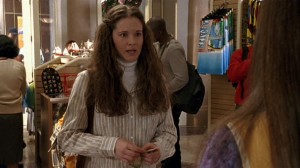 “Karma Chameleon” (B)
The thing about cult shows is their reputation proceeds them. The cult of Wonderfalls is built entirely around its fascinating cast of characters, many of whom can be more interesting than protagonist Jaye Tyler, even though she’s a sarcastic force of nature. As enjoyable and breezy as this show can be, this isn’t even close to being on the level of a Freaks and Geeks or Firefly. This week’s riff on Single White Female isn’t quite enough to convince me that this show was taken too soon, as it goes into narcissistic extremes. Still, I find the cast more entertaining than a lot of shows on now. I can only imagine how much I would have responded to them back in 2004, when TV hadn’t quite developed into its New Golden Age.