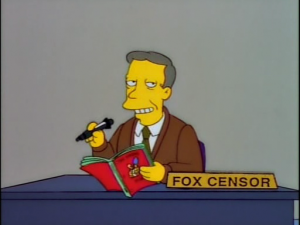 “Treehouse of Horror VII” (A-)
As usual, the Halloween episodes allow for a greater amount of creativity, both visually and plot-wise. The best of the three is “The Homega Man,” which repurposes I Am Legend to allow Homer to basically act like he usually does, with even fewer consequences. The scene of him dancing nude in church is one of my all-time biggest laughs, followed closely by him mowing down (non-zombie) Edgar and Johnny Winter. “Fly vs. Fly” has some inspired bits, but it’s ultimately forgettable. “Easy Bake Coven” is also fairly standard, but works best as precursor to Springfield’s unending mob mentality. 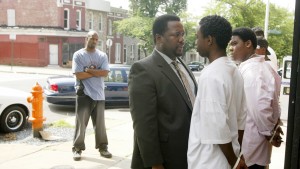 “Hamsterdam” (A-)
Even when it sprawls out, I love The Wire because it’s consistently great in its small conversational moments. Take for example the scene in which Cutty’s boss explains that back-breaking work as a day laborer is the best he can hope for at this point. There will be no glory, no big pay day. He will exhaust himself until his body gives up on him, and that will be that. It’s no wonder he goes straight back to Stringer’s crew. Such is the harsh reality of life as an ex-con. There is only a circle back to dealing. That’s why, even with the promise of free rein to sell in a desolate part of town, the corner boys keep coming back to where they’ve been told not to go. They simply can’t function with freedom.