Well, folks, we’re finally getting started, just a little bit later than usual. Thanks to a crazy move and some trying weeks, I just hadn’t been able to get started this summer. Because of this, I’ll be cutting back on my intended coverage, dropping Party Down altogether. Given my current workload with College Movie Review and Central Track, in addition to my day job and having to move yet again (long story), there are just too many competing interests – plus a lot of other good television – to devote even the two-and-a-half hours necessary for all those classic shows. So this summer, it’s just Season 9 of The Simpsons (the beginning of the end for most fans of the show) and Season 3 of The Wire. Hope you enjoy! 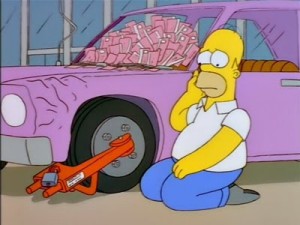 “The City of New York vs. Homer Simpson” (A)
A holdover from Season 8, this is one of Homer’s strongest episodes, especially since he’s not a total buffoon. It’s a little difficult to watch this episode post-9/11, given it primarily takes place right smack in the middle of the World Trade Center. It’s also dated, considering most of New York is either tourist-friendly or overrun by hipsters and their artisanal this and that. In late-’90s NYC, the Giuliani makeover hasn’t completely finished, so it’s a source of constant frustration to outsiders like the Simpsons. 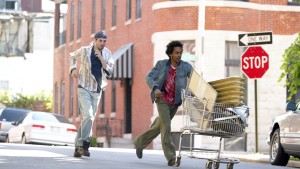 “Time After Time” (B+)
A table-setter, as we move away from the docks and back to the inner-city. The demolition that starts the episode is primitive CGI at its worst, but it also represents a new direction for the story, as everyone – politicians, cops and criminals – are all mired in bureaucracy. In Baltimore, every victory is a Pyrrhic one. Up the hill just to roll back down.