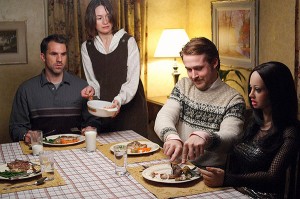 Last time I watched it: One of the few movies I’ve never finished, I saw Lars and the Real Girl one evening with my folks. We made it about 20 minutes in before we gave up on it for being “too weird.” Also, where’s the comedy?

Why I gave it another shot: My good friend (and fellow film fanatic) Lea is a big advocate of this movie, and it was an Oscar nominee (Best Original Screenplay, 2007).

This time around: I thought I might be more forgiving of a romantic comedy in February. Y’know, Valentine’s Day and all that.

I would be, except Lars and the Real Girl is neither romantic nor a comedy. The relationship at its core: Lars, a borderline-creepy loner (Ryan Gosling, doing his absolute best) and a sex doll he orders from the Internet. But “Bianca” exists not to indulge his lust. Their relationship is completely chaste, and he even invents a backstory that she’s a Brazilian missionary on furlough. Things only get weirder from there.

His sister-in-law (Emily Mortimer) insists on playing along, as does Lars’ doctor (Patricia Clarkson). Eventually, everyone in this idyllic small town comes around and treats Bianca like a real person.

The movie fancies itself a latter-day Harvey, but that movie had charm coming out the wazoo. In that film, Elwood P. Dowd (Jimmy Stewart) was a delight to be around. Lars, for all his nice tendencies, always looks like he’s one step away from chopping you up with an ax. Elwood tipped his hat; Lars blinks – a lot.

The biggest overall problem with Lars and the Real Girl lies with its tone; the movie can’t pick one. Until its overly sentimental and painfully obvious third act, this could only be a drama, because nothing funny ever happens. Nothing sad happens either. Things just happen. Everything’s so mundane, the movie just lies there, lifeless like Bianca.

The movie also tries to pull off two impossible things. First, it tries to make bowling look fun. Second, it tries to make Ryan Gosling look unattractive. I thought this unsuccessful trend only applied to women in indie films. Key examples include Kate Winslet in Little Children, Emma Stone in The Help and Natalie Portman in Hesher. Lars represents another failed attempt to make this work.

Ultimately, nothing really works in Lars and the Real Girl because it can never commit to being anything. The only person doing any acting is Gosling. Everyone else has to simply react to whatever crazy momentary feeling he might be having. But by this movie’s logic, it’s good to indulge him because he’s such a sweet guy, and it’s nice to do nice things for nice people. That may look great on a needlepoint, but as a movie it looks ridiculous.

This entry was posted in Essays, Film, Reviews. Bookmark the permalink.