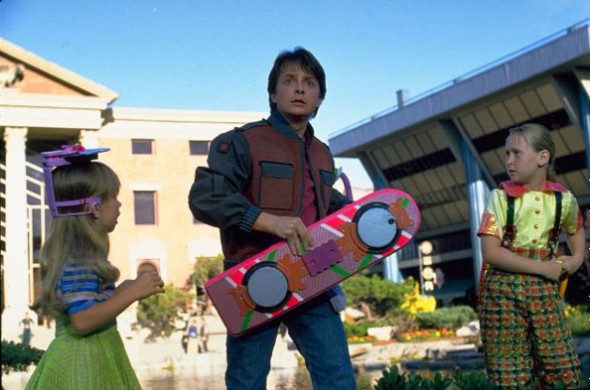 Last time I saw it: Despite my initial fascination with it in my youth, I had begun to think of Part II as the worst part of the trilogy. It was dark, bizarre and kind of mean. But man, those hoverboards were cool.

Why I gave it another shot: Two of my closest friends and many others cite it as the trilogy’s high point.

This time around: Much better than I remembered it, though it in no way tops the original.

Back to the Future, Part II takes place immediately after the events of the first film, as Doc and Marty – and Marty’s girlfriend Jennifer, now played by the oh-so-delectable Elisabeth Shue – travel to 2015 to prevent Marty and Jennifer’s son from committing a crime that derails the entire McFly family. Sadly, Shue gets almost no screen time, only showing up to faint and create time paradoxes.

The plan goes off seemingly without a hitch. Marty stands in for his son and rejects the criminal proposal of Griff, Biff’s grandson. Obviously Griff isn’t too keen on this decision, and chases Marty on his hoverboard, in one of the movie’s most fantastic sequences. After forcing Griff and his gang to overshoot him, Marty wanders around the Hill Valley of the future, and buys a sports almanac, planning to go back in time to place bets and make some extra cash. Biff overhears this and steals the DeLorean, setting off a disastrous chain of events.

And thus sets up Part II’s biggest problem: It’s too busy. After solving one problem in the future, Doc and Marty have to go back in time to fix another, and then another. It hopscotches from one era to another to another, so we never get a sense of these other places the way we did with 1955 in the first film. It’s also plotting overkill. The first movie works because of its simplicity, among many other things. But there’s so much to keep with here it can become exhausting. It’s also responsible for this terrifying image.

Yet Back to the Future, Part II is still massively entertaining. It’s never dull and Michael J. Fox is as effortless as ever. The special effects stepped up another level from the already spectacular shots in the first film. And while I don’t care for its execution, the movie attempted to explore some of the darker aspects of time travel.

Back to the Future, Part II also might be the first “modern sequel,” and that’s not a compliment. After the first movie became a smash, the sequel was greenlit with double the budget and a prime opening date. But like so many sequels, bigger doesn’t equal better. It’s busier, with more special effects and jokes, but the charm and wit of the first film are sorely lacking. Examples include Die Hard 2, Men in Black II and Iron Man 2. These movies aren’t bad, per se, but suffer greatly in comparison to their predecessors.

One more thing this sequel set up: a revision to the Screen Actors Guild contract. See, Crispin Glover refused to sign on due to salary disputes. Depending on whose side you believe, the producers tried to low-ball him while giving everyone else a raise, or Crispin Glover was a self-important little cretin who thought he demanded a lot less than he deserved.

After Glover dropped out, Gale and Zemeckis plotted an act of overly plotted revenge—apropos for this sequel. They killed off Glover’s character for a good chunk of the story. Then they hired another actor and fitted him with prosthetics to look more like Glover, instead of just replacing him full-on like they did with Claudia Wells. So Glover sued all the producers (including Spielberg) for using his likeness without permission. They settled out of court and now clauses in SAG contracts ban such methods.

Game changing aside, Part II doesn’t deserve a reputation higher or lower than what it is: a good but disappointing sequel.

This entry was posted in Essays, Film, Reviews. Bookmark the permalink.