Random Thoughts on Season One of Orange is the New Black 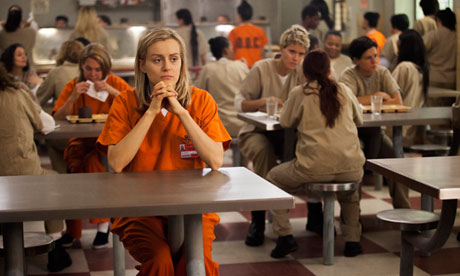 This is pretty much what I’ll do for Netflix series from now on. If you don’t like it, say so in the comments. Do not read on if you haven’t watched all 13 episodes.

• Who knew Taylor Schilling was so good? I had previously only seen her in the rather terrible Nicholas Sparks adaptation The Lucky One, but she was fantastic and utterly believable the whole season, even if she ventured into being unlikable. Though occasionally it was hard to get past how much she looked like a blonde Katy Perry.
• What a ballsy show to make Piper so unlikable yet sympathetic the whole time. That’s a delicate balancing act, and Schilling and the writers pulled it off remarkably.
• Speaking of being shockingly good, Jason Biggs—channeling his angst for more than just premature ejaculation jokes—and Laura Prepon—both sexy and smart in equal measure—blew me out of the water.
• But it was the lesser known actresses who stole the show: Michelle Hurst (Miss Claudette), Samira Wiley (Poussey), Danielle Brooks (Taystee), Uzo Aduba (Crazy Eyes), Vicky Jeudy (Watson), Constance Shulman (Yoga Jones), Laverne Cox (Sophia) and Beth Fowler (Sister Ingalls). The latter two had great chemistry.
• And before I forget, Kate Mulgrew and Natasha Lyonne killed it. What an abundance of tremendous acting this show had.
• OK, so the men aren’t viewed in the best light. Even Bennett can be a total douche sometimes.
• I really liked Mr. Healy at the beginning, but by the end I hoped he and just about everyone in the upper ranks of the prison system would lose their jobs.
• It’s often difficult to add complexity to an amoral person, but Pablo Schreiber was terrific as Pornstache. It takes a lot of work to make us hate him so thoroughly, but boy did he ever do it. I will say that was the one subplot of the season I didn’t buy for a second: Him being in love with Diaz after her specifically planned seduction.
• I’m still rooting for Diaz and Bennett to work it out, even if it seems that will only end in heartbreak.
• As the season wore on, it definitely became more of a drama than a comedy, but Netflix should still submit this as the latter for next year’s Emmys. It’s a lock for Best Comedy and you could fill the whole Supporting Actress in a Comedy category too.
• The show did a great job of de-glamming some seriously beautiful women to play the inmates, particularly Taryn Manning as Pennsatucky. (Before and after)
• I love how the backstories were spread out through the whole season, some with flashbacks (Sophia), some with heartbreaking stories (Yoga Jones). They also gave a sympathetic angle to most of the women as victims of circumstance.
• There were no megaphones needed. The show matter-of-factly presented everything it needed to about how awful prisons are—corrupt places where people with very little power become tyrants over people with no power—while still showing the resiliency of the inmates to form a tight-knit community.
• I liked the Regina Spektor theme song, but it got annoying during a binge.
• I thought it wouldn’t get any sadder than Tricia dying, but during Larry’s radio interview, Crazy Eyes became Misty Eyes and I couldn’t hold it in. Then Larry broke up with Piper, who could no longer run to Alex. Brutal.
• Michael Chernus was great as Piper’s actively disinterested brother Cal. Also, “Fat Bon Iver” is the new insult du jour.
• There’s so much release and terror in Piper’s beatdown of Pennsatucky. It’s totally earned, but this can only end badly.
• I would recommend this show to everyone, except those who are squeamish when a sex scene comes on.