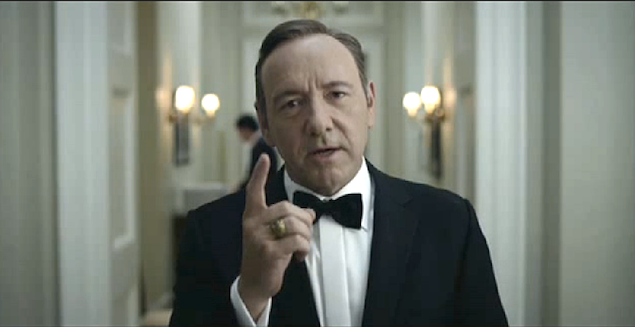 The latest season of House of Cards has been out on Netflix for two weeks now. Here’s what I thought of it. Tons of spoilers ahead.

• I liked this season better than last season, which was an improvement over the first season. But I still don’t know if I’m ready to call this a “great show.” House of Cards is still a good show that occasionally punches above its weight with great moments.
• The reason I like this season so much is its title comes true: the house of cards Frank built is falling apart all around him.
• I’m glad they didn’t kill Doug, but I don’t exactly like where they took him in the last two episodes.
• There’s really no reason for him to hunt down Gavin and Rachel. Even if the latter wasn’t dead, she was never going to tell anyone. She was making her own way and going to get out, just like Gavin. Having Doug kill her proved what, exactly? That now he’ll have a nagging conscience while serving as Frank’s chief of staff? Yawn.
• I really wanted more from Remy, but I felt like he was underserved by the writing. No fault of Mahershala Ali.
• Speaking of being underserved by the writing: Kim Dickens KILLED IT in Gone Girl. Here, the script makes it awfully hard to believe she’s an award-winning journalist. That column in her voiceover about “Hurricane Francis” was dreadful.
• That being said, I loved Paul Sparks as Tom Yates. He was the most interesting character. I’m also interested in the fan theory floated on Reddit that he’s HIV-positive. Although if he was, I’m sure the show would have made a much bigger deal of it. This show is not known for its subtlety.
• Case in point: “Guess I’ve got God’s ear now.” I haven’t decided if that’s awesome or awful yet.
• Robin Wright (Claire) gets the most she’s ever had to do and rises to the occasion. She’s fantastic.
• So in that hotel in Iowa, was Claire trying to prove that Frank isn’t even sexually attracted to her anymore? I think she’d already made up her mind that he didn’t love or respect her. Was that the last straw? Or was it symbolic? Did she want him to see how he was now literally taking advantage of her instead of just metaphorically?
• I don’t know if raiding FEMA was the best way to go about it, but Frank’s AmericaWorks problem isn’t all bad. Entitlement reform is one of the biggest things this country needs.
• Trying to get Frank for violating FEC rules is like nailing Al Capone for tax evasion.
• Lars Mikkelsen was the best guest star the show has ever had. He absolutely embodies Putin: the arrogance, the ruthlessness, the flamboyance. He’s finally a worthy foil for Frank.
• Dirtiest thing Frank did this season was throw Jackie under the bus (metaphorically) during the Iowa debates. Can’t burn all your bridges, Frank.
• I thought the letter Frank wrote to the soldier’s parents was going to be a bigger deal than it was.
• No creepy sex scenes and only one murder. How far we’ve come.
• I really thought Frank was going to kill that Supreme Court Justice to force Dunbar to take his spot.
• Frank is obviously not a good guy, but I don’t know what he needs to worry about. Americans would never elect a Solicitor General for President. She could possibly win the primary, but they’re always going to pick a Senator, Representative or Governor.
• Kudos to the make-up department for making Frank look fat and grey. The presidency takes it out of you, even if you weren’t elected to it.

This entry was posted in Reviews, Television and tagged house of cards, netflix. Bookmark the permalink.