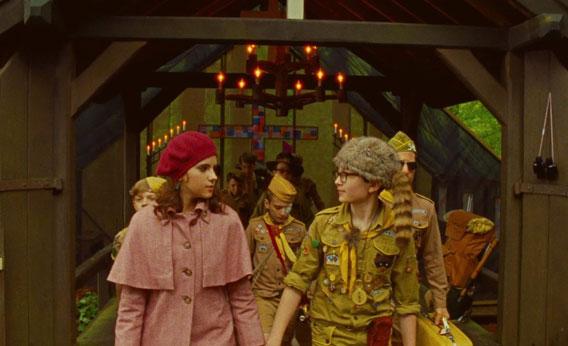 It’s 1965. Two kids are missing. Most parents would be worried sick, but in the bizarre world of Wes Anderson, the parents are merely inconvenienced.

The two kids are Sam and Suzy. Sam is an orphan; the parents (Bill Murray and Frances McDormand) are hers. They have actually planned this escape. They rendezvous at a little cove they dub Moonrise Kingdom.

Both kids are not particularly well-liked by their peers, so their bond of attraction grows deeper. Some who see the film will be put off by how close they get. But let’s be honest: two 12-year-olds, away from their parents, with no authority figures around, are bound to follow their impulses.

Anderson has found two spectacular leads in Gilman and Hayward, who flesh out their characters with resignation and bitterness, respectively.

The cast also includes Edward Norton—giving his best performance since 25th Hour—as a Dudley Do-Right scoutmaster. He shares the outcast bond with Sam, his best scout. There’s also Bruce Willis, showing vulnerability absent in his recent roles, as the island police chief, and the always-great Tilda Swinton, known only as Social Services. Her brusque agent plans to ship Sam off to an orphanage once he’s found.

Still, for all the sadness under the surface, this is an exciting, funny, romantic film. It’s escapism at its best.

Anderson’s quirky trademarks—the patterned color schemes, the meticulous art direction, the perfect music selections—go full tilt in Moonrise Kingdom. Depending on your feelings about this sort of kitsch, you’ll either place this movie toward the top of filmography, or it’ll drive you nutty.

With 2009’s Fantastic Mr. Fox, Anderson evolved as a screenwriter, giving his films a narrative economy and making them family friendly (if your family loves independent films), while remaining as witty as ever. The trend continues with Moonrise Kingdom, the best movie I’ve seen so far this year.