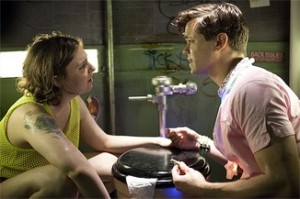 I’m beginning to wonder just how quickly a show can burn up its good will. Girls has almost managed to do it, and we’re only in episode 3 of this season.

While there were certainly some great moments in the episode (the art installation and the opening scene for instance), most of this episode felt completely and utterly pointless. Hannah and Elijah go on a coke bender. But don’t worry! It’s for a story she’s writing for a website that’s like some horrible amalgamation of Slate, Nerve and Jezebel. Forget all the warnings from the ex-junkie dealer and the specter of Len Bias’ sudden death because WE’RE GONNA LIVE FOREVER! Every week, characters do stupid things, but this is by far the stupidest.

At least it let the characters talk about the Elephant in the Room (Elijah and Marnie’s hook-up), instead of letting it fester all season long. Hannah unloads everything she’s angry about on her former and current roommates with both barrels, all in an attempt to appear to be righteous. Marnie accepts her “bad friend” status while Elijah tries to shrug off the affair because he “lost [his] boner really quickly.”

I’ve become surprisingly sympathetic to Marnie this season, and this episode was no exception. Granted, she wandered away blindly with Booth (guest star Jorma Taccone) because she was lonely and he somehow turns her on by being a completely self-aware asshole. He also happens to be a curiously brilliant visual artist. Like Marnie, I was initially repulsed but eventually immersed in his video installation. But then I went back to being repulsed because Booth likes to have a creepy doll watch his sexual exploits. He’s sort of like a pretentious Dennis from It’s Always Sunny in Philadelphia.

So this episode ends like last season’s finale, with Hannah all alone, fumbling around for some sort of connection or meaning. I’m feeling the same way about this show. My DVR is getting mighty full these days and if this next episode (airing a day early to avoid conflicts with the Super Bowl) doesn’t grab me like any season one episode, I may have to get off this train.

Bitch of the week: Hannah, who’s less concerned with an apology than who has to wear the “Bad Friend” sash. And she sleeps with her ex-junkie neighbor “just for one night,” even though she knows he harbors a serious crush on her and said still looked like a junkie even after he’d gotten clean.

Worst fashion choice: Everything was hideous this week, and the most egregious offender was that highlighter-yellow mesh tank top Hannah took from that dancer.

“What’s a girl like you doing in a place like this?” (for a character who barely makes an appearance): Shoshanna, who remarks that junkies always hang out by the mailboxes.