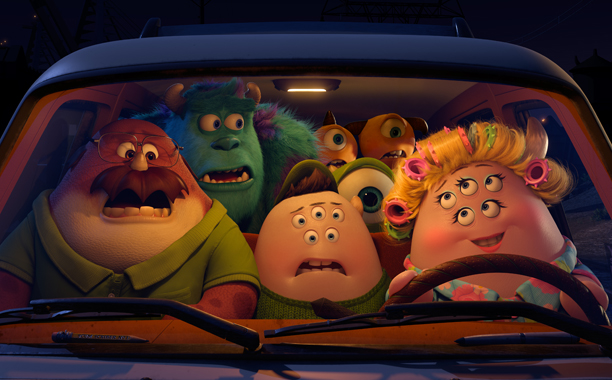 It’s a cliché, but you learn more about yourself in college than you do at any other time in your life. Monsters University gets this aspect of higher education more than anything else, and uses that tweak what we already know about characters we love and give them more nuance and depth.

Mike (Billy Crystal) is our wide one-eyed view into the pre-scaring days of Monsters, Inc. Ever since a field trip to the Scare Floor, he’s made becoming the world’s best scarer is top ambition. He’s studied every textbook and has every trading card. Despite his small stature, he’s made it into the best scaring program at the top school in the world. Unfortunately, he’s just not scary. It’s not in his nature. (More on that in a minute.)

Frustrating him throughout the semester is Sully (John Goodman), a slacker so casual Richard Linklater himself couldn’t have come up with one better. Coasting on his name recognition alone, he never studies and barely shows up to class. We all know they become friends, but one of the many interesting factors of Monsters U is how they bring them together.

Kicked out of the scaring program after failing their first-semester finals, the duo strike a deal with Dean Hardscrabble (a perfectly icy Helen Mirren) to allow them back in if they win the spring Scare Games. But who wants to align with two outcasts? The fraternity Oozma Kappa of course.

It’s here that the movie really takes off, because the Scare Games allow for the animators to get colorful and creative, just like last year’s Wreck-it Ralph. Even if Monsters U doesn’t put you through the wringer like Pixar’s top-tier films (WALL-E, Up and Toy Story 3), it finds ways to tell an emotional story while keeping the tone light. In fact, I’d dare say Monsters U is the funniest film the studio has ever released.

But what brings it out of the fray of “fun diversion” and into the halls of great animated films is the distinctly un-Disney lesson it teaches. Mike, for all his determination, is simply not good at his dream job. For decades, nearly every animated film—and many live-action ones as well—has beat this message into us: You can do anything you set your mind to. As any recent college grad will tell you, that’s simply not true. Circumstances change. Jobs go away. People aren’t always who you thought they’d be.

Instead of keeping the myth alive, Monsters U grounds its fantasy story in reality. But it’s not cynical. The movie’s message is more along the lines of what Conan O’Brien told his audience on his last night as Tonight Show host: “If you work and you’re kind, amazing things can happen.” The dream may not have come true, but that doesn’t make the rest of your life any less extraordinary.

This entry was posted in Film, Reviews and tagged monsters u, monsters university, pixar. Bookmark the permalink.