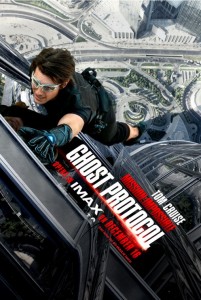 Mission: Impossible – Ghost Protocol (PG-13)
Starring Tom Cruise, Paula Patton, Jeremy Renner
Screenplay by Josh Appelbaum & André Nemec
Directed by Brad Bird
I’ve been excited about this one for a good six months now. Brad Bird leaves animation after making one of the greatest action movies of all time (The Incredibles) and takes us from Moscow to Dubai and other exotic locales as Ethan Hunt (Cruise) and a skeleton crew of IMF agents try to figure out who framed them for a bombing that left hundreds dead. Bird shot nearly an hour in IMAX, and critics note it’s worth seeing in that format. But be careful: the only two legit IMAX theaters in Dallas are at NorthPark and Cinemark at 635 and Webb Chapel. Any other theater that claims to have IMAX only has screens that are merely a bit larger than the average screen. 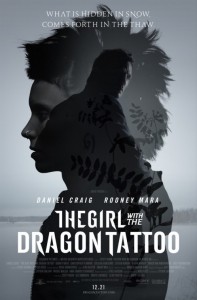 The Girl with the Dragon Tattoo (R)
Starring Daniel Craig, Rooney Mara, Christopher Plummer
Written for the screen by Steven Zaillan
Directed by David Fincher
Fincher is one of the most visually striking directors working today, and he packs the dense stories of his screenwriters into films that are almost overwhelming in their scope—punching you in the gut as you try to unravel the many mysteries hidden in the film. He’s got great source material to work with here, though if you’ve seen the original Swedish film (as I have), you’ve got to wonder if he’s merely taking an already pretty-good film and just adding some longer takes and a great score from Trent Reznor and Atticus Ross. In essence that’s not bad, but in theory that could make this the only film of Fincher’s that could be called pointless. 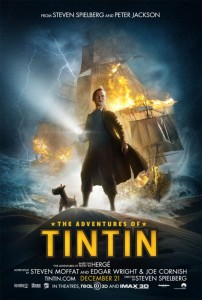 The Adventures of Tintin (PG)
Starring the voices of Jamie Bell, Andy Serkis, Daniel Craig
Written for the screen by Steven Moffat and Edgar Wright & Joe Cornish
Directed by Steven Spielberg
Could it be? A movie that looks like it’s worthy of the 3-D surcharges? It’s a Christmas miracle! Actually, it’s just the magic of Spielberg. He oversaw the motion capture of this adaptation of the Belgian graphic novel. A boy (Bell) teams up with a sea captain (Serkis) to hunt treasure in the hull of a sunken ship. The film looks nothing short of exhilarating, with stunts that could only exist in the realm of animation.