The Weekender: Just give it some ‘Time’ 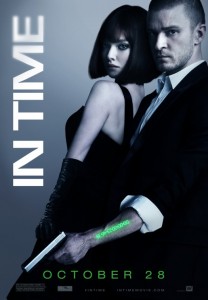 In Time (PG-13)
Starring Justin Timberlake, Amanda Seyfried, Cillian Murphy
Written and directed by Andrew Niccol
While the plot sounds incredibly complicated, bear with me. In a dystopian future, with nearly all worldwide currencies worthless, the only valuable measurement of wealth is time. Those few who have decades have more power, while millions scrape by, literally day-to-day. When a factory worker (Timberlake) saves a high-powered executive (Matt Bomer, White Collar) from a robbery, the wealthy/ancient man gives away his fortune to Timberlake. Unfortunately, no one saw this transaction take place, so naturally he’s accused of murder and heads out on the lam. The plot may sound like silly sci-fi but Niccol’s the man behind two of its best entries: Gattaca and The Truman Show. Plus, with Roger Deakins (most Coen Brothers movies) providing cinematography, it will look nothing short of breathtaking. 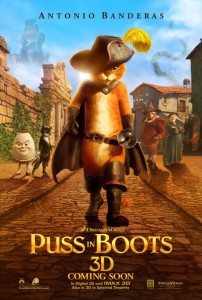 Puss in Boots (PG)
Starring the voices of Antonio Banderas, Salma Hayek, Zach Galifianakis
Screenplay by David H. Steinberg, Tom Wheeler, Jon Zack
Directed by Chris Miller
I gave a middling review to Shrek the Third and completely skipped the final installment. So why am I excited for this spin-off? A few reasons. First, it felt like Banderas was the only one not going through the motions past Shrek 2; he clearly relished in a role that winked at his days as Zorro. Secondly, the ad campaign has been genius. It’s easily the best since Despicable Me. Finally, Zach Galifianakis as Humpty Dumpty. I’m in, but as always, you can skip the 3-D. 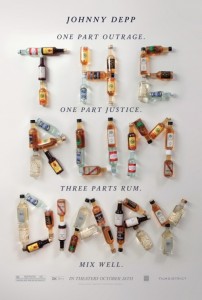 The Rum Diary (R)
Starring Johnny Depp, Amber Heard, Aaron Eckhart
Written for the screen and directed by Bruce Robinson
At this point in his career, Johnny Depp can do anything. But that doesn’t mean he should. It’s been something of a passion project for Depp to star in an adaptation of Hunter S. Thompson’s long-unpublished novel, but I can’t see the market for it. Then again, no one thought he could turn a theme park ride into a blockbuster. Ultimately, this just doesn’t look funny or interesting, something Depp is usually adept at pulling off in any of his movies. 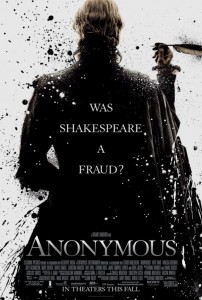 Anonymous (PG-13)
Starring Rhys Ifans, Vanessa Redgrave, Rafe Spall
Written by John Orloff
Directed by Roland Emmerich
The man who’s destroyed—and saved—Earth countless times in his many disaster movies, Emmerich is set to grill some sacred cows. Anonymous takes the theory that Shakespeare (Spall) was a fraud, that the Duke of Oxford (Ifans) actually wrote all of his plays. This will probably go down as the most interesting failure of the year, considering how far Emmerich is outside his comfort zone, and how big the set of cojones he must have to adapt such a loony idea.
PLAYING AT AMC NORTHPARK, THE MAGNOLIA and CINEMARK WEST PLANO 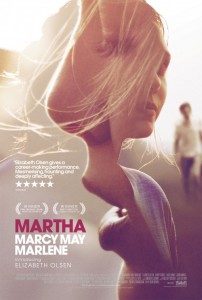 Martha Marcy May Marlene (R)
Starring Elizabeth Olsen, John Hawkes, Sarah Paulson
Written and directed by Sean Durkin
Finally, we’re getting to one of my top 5 most anticipated fall releases (the others? A Very Harold & Kumar 3D Christmas, The Muppets, Shame, and Mission: Impossible – Ghost Protocol—quite a mix, eh?). Elizabeth Olsen, the younger sister of Mary-Kate and Ashley, makes her film debut as a woman who escapes a cult led by the charismatic but dangerous Patrick (Hawkes). She crashes with her sister (Paulson), but can’t seem to distinguish what really happened to her and what she’s just imagining. There’s already serious Oscar buzz for Olsen and Hawkes and, if the movie continues to do well, for Best Picture, too.
PLAYING AT THE MAGNOLIA and CINEMARK WEST PLANO 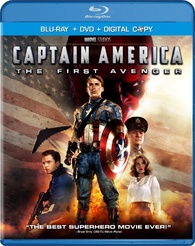 Captain America: The First Avenger (78%)
A superhero movie that gets just about everything right, Captain America sets itself apart from this summer’s glut of comic book movies by remaining steadfastly old-fashioned. Director Joe Johnston takes to the material like a kid in a candy store, but with the assuredness of someone who’s directed films for 20 years. The performances are excellent across-the-board, the make-up and costume design are top-notch and the effects are superb without being flashy. There’s little more you could ask for.

Criterion: Identification of a Woman, Island of Lost Souls, Dazed and Confused [Blu-ray]