Neighbors
Can a raunchy comedy be this respected? Can Dave Franco be funnier than James Franco? Is Zac Efron finally finding his career path? Can we just give Rose Byrne her own comedy already? All these questions and more will answered in the the first action alternative of the summer. 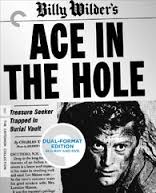 Ace in the Hole [The Criterion Collection]
Billy Wilder’s darkest film features a career-best performances from Kirk Douglas (you heard me) as an amoral journalist who exploits a trapped miner’s rescue so he can make it into the biggest story of his career. Shockingly, it’s even more relevant today. It’s an ugly film, but a brilliant one.