The Weekender: An ‘Engagement’ you won’t want to miss

Note: I’m out of town this week, exploring the Pacific Northwest. That means I’ll only be able to cover the major releases. Be sure to check out your local indie theater’s website for details on limited releases.

IN THEATERS:
The Five-Year Engagement (R)
Starring Jason Segel, Emily Blunt, Alison Brie
Written by Jason Segel & Nicholas Stoller
Directed by Nicholas Stoller
The team that gave Forgetting Sarah Marshall—one of my all-time favorite comedies—its beating heart returns with another romantic comedy. This time Jason Segel is lucky in love. He’s the fiancé of Emily Blunt. Unfortunately, work and other commitments keep them from having their dream wedding. Everything looks like it’s got the elements that made Forgetting Sarah Marshall such a winner in the first place. Ladies and gentlemen, here’s the first great movie of 2012.

Safe (R)
Starring Jason Statham, Catherine Chan, Chris Sarandon
Written and directed by Boaz Yakin
To paraphrase Ron Washington, Statham do what Statham do. This time, he has to recover a kidnapped girl from a gang. Standard Statham stuff, which is never a bad thing.

The Raven (R)
Starring John Cusack, Alice Eve, Brendan Gleeson
Written by Ben Livingston, Hannah Shakespeare
Directed by James McTeigue
Oh, John Cusack. I’m a big fan of yours, but this just looks silly. You’re Edgar Allan Poe, and you’re trying to find the killer who’s using the methods described in your books to dispatch his victims. I’m gonna go ahead and predict the twist is that you’re the killer. Besides, we don’t a retread of From Hell. Should you keep making movies like this? Quoth me, “Nevermore.”

The Pirates! Band of Misfits (PG)
Starring the voices of Hugh Grant, Salma Hayek, Jeremy Piven
Screenplay by Gideon Defoe
Directed by Peter Lord & Jeff Newitt
Claymation doesn’t always catch on in the U.S. But I hope this one does, cutting into the box office reign of DreamWorks and Pixar. Competition is a good thing. Furthermore, this looks like a jolly good show, with all its very British humor and jokes about Charles Darwin and dust-ups with the Queen.

Wednesday also marks the beginning of the USA Film Festival. I had the honor of being on the short film collection committee. Awards for those shorts will be handed out Sunday night. Find out more information at the festival’s official website. 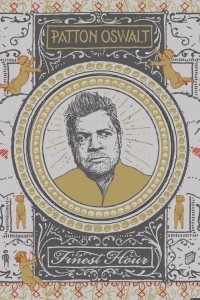 Patton Oswalt: Finest Hour
Patton Oswalt has gone from quirky guest star to cult icon. He got robbed of an Oscar nomination for Young Adult, but he’s still laughing. His latest comedy special takes on some of his favorite topics, including religion, politics and the beauty of being fat and lazy. This will also be an interesting artifact as stand-up specials move away from physical DVDs and more toward artist-direct downloads.