I’m now completely done with House of Cards and I have to say that while I’m not disappointed, the show could have gone deeper, given its characters more to do (aside from Frank and Peter) and been a little more devastating. Season Two needs to get rid of the CWI storyline as quickly as possible and make the Slug Line stuff more interesting. As a former journalist, this was probably the least convincing part of the show for me. As always, follow me on Twitter (@kipjmooney) so we can chat about it. 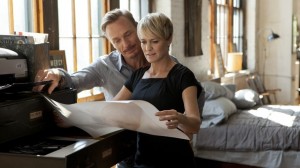 “Chapter Ten” (B+)
Aside from that sex scene a few episodes, this was the most uncomfortable an episode of this show has made me. But it was a good kind of uncomfortable, the kind when you’re watching characters you’ve come to care about make horrible decisions and you can’t stop them. I kept shouting “No! No! No!” when Rachel started leading Peter astray, pulling him off the wagon and leading him to blow the first major interview of his gubernatorial campaign. We also got the cruelest thing anyone’s ever said on this show, and that’s saying something. It’s a soul-crushing moment when Claire tells Adam, “I wanted someone I could love for more than a week at a time.” Just brutal. This episode doesn’t get into the A’s because Lucas feels like the most useless character on this show. Again, that’s saying something. 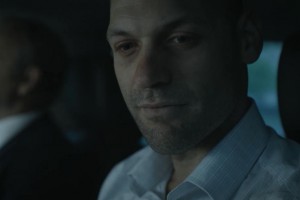 “Chapter Eleven” (A-)
Things go from bad to worse for Peter, who jumps out of the frying pan of relapse and into the fire of full-blown alcoholic binge. It’s incredibly depressing and Corey Stoll plays the hell out of it. If he pulls off the Emmy nomination, I’d say he has a great chance to win. But it just keeps getting worse as Frank does the most evil thing he’s done all season and possibly ever. Since neither he nor Peter see a viable way out of this mess, he seizes a horrific opportunity when Peter passes out in his car. Frank just keeps the car running, wipes his prints off and closes the garage door. This is some straight-up Walter White shit and officially destroys any remaining chance of rooting for him to succeed. 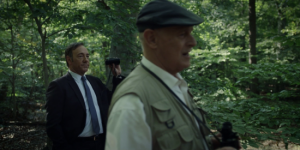 “Chapter Twelve” (B)
In many ways, the penultimate episode of House of Cards exemplifies all the show’s weaknesses. The stuff with Frank and Raymond Tusk (an Emmy-worthy Gerald McRaney) is fascinating and juicy. Everything else is yawn-inducing. The Clean Water Initiative stuff continues to make me drowsy. There’s potential there for some claws to come out but they never do. It’s just dull. Worst of all, the Zoe-Janine-Lucas trio never gets my blood pumping the way it should, what with me being an ex-journalism student and all. And don’t get me started on the dead end of trying to replace Peter with his grade-school buddy. 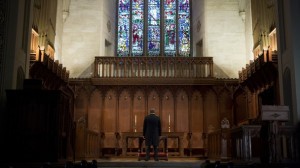 “Chapter Thirteen” (B+)
So we come to the end, with Frank on the verge of becoming Vice President. Claire is on the verge of leaving him or having a baby one way or another to assuage her conscience. Zoe, Janine and Lucas are on the verge of discovering Frank’s web of deception. But by not giving us resolution, House of Cards becomes like all the other great modern TV series by making us wish the next season was starting right this minute. 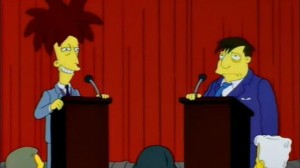 “Sideshow Bob Roberts” (A-)
It’s the lighter side of politics as Sideshow Bob gets released from prison to run a crooked mayoral campaign against “Diamond Joe” Quimby. Easily one of the sharpest of the show’s many satirical episodes, this episode gets it all hilariously right, even if it’s not one of my all-time favorite Sideshow Bob appearances. It also got me to do something I never thought I’d do: side with Quimby on something. “The Cut Man Cometh” (B+)
A very show-heavy episode, but that’s not a bad thing. CSC finally gets to cover a major heavyweight bout, but sadly the fight ends in seven seconds and the color man is a drunken glory hog. It makes for a bad show for them, but a great show for us. The editing stands out above everything.

“The Sweet Smell of Air” (B+)
So after all that, Casey lets her go?! I can’t say I blame him, but I don’t know if I like Dana looking in Sam’s direction all of a sudden, no matter how well William H. Macy plays his nonchalance. Still, as another show-heavy episode, we can focus less on the relationship stuff that so often drags down a Sorkin show. The show refuses an interview with Michael Jordan because he will only talk about his new fragrance and not sports. It’s mildly courageous, but definitely something that only exists in Sorkin’s noble fantasyland. 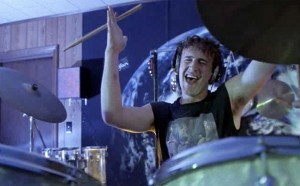 “I’m with the Band” (A-)
It’s easy to love Jason Segel’s Nick. But it’s also easy to see that he’s headed for a dead-end life if he doesn’t figure something out soon. As much as he loves drumming, he’s never going to make it, and this episode sends him crashing back to earth. It’s depressing but it’s realistic, which again separates Freaks and Geeks from just about every teen movie and show ever made. And even though I found Sam’s storyline — about refusing to shower after gym class — seemed pretty slight, it was easily relatable for me, someone who’s never been in ideal or even good shape. Plus, I love how it ends for him with his inadvertent streaking brought him school-wide fame instead of embarrassment.

This entry was posted in Reviews, Television and tagged amazon, freaks and geeks, house of cards, netflix, simpsons, sports night. Bookmark the permalink.