And so begins another summer of working our way through classic series. I’ll continue my coverage of The Simpsons‘ 7th season and begin with the first seasons of The Wire, Undeclared and Blackadder. 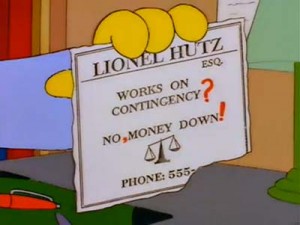 “The Day the Violence Died” (A)
Yet another classic from John Swartzwelder. Though the story focuses solely on Bart’s quest to get Itchy and Scratchy’s true creator (voiced by Kirk Douglas, whom I’d argue is the most underrated guest performer on the show) royalties for his cartoon mouse and cat, it’s really more of a loving homage/biting commentary on animation and then men who make it. This episode also features my favorite lines from Milhouse (“Look out, Itchy! He’s Irish!”), Comic Book Guy (“Are you the creator of Hi and Lois? Because you are making me laugh.”) and Lionel Hutz (pictured above). 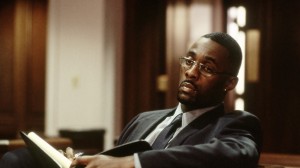 “The Target” (A-)
Based solely on this pilot, I can already believe that this might be one of the greatest dramas ever. But there’s a lot to sift through here, and it can be difficult to keep up with so many characters. Yet David Simon immediately establishes a great sense of place, unrivaled by many dramas. While the writing is tremendous, it often eschews subtlety to the point where any allegorical intentions are lost. 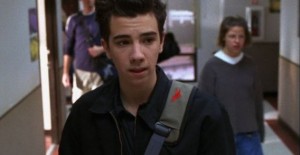 “Prototype” (A-)
There are only a few near-perfect comedy pilots, and this is one of them. Of course if you compare this to Freaks and Geeks, it’s nowhere near as good. But as a college-set comedy – the likes of which we wouldn’t get again until Community – it’s golden. As legend goes, Jason Segel was cast in the lead role until Fox realized it wasn’t working. In this case, it’s a rare example of network interference helping a show. Jay Baruchel’s much better as the bewildered freshman. This does everything a great comedy pilot needs to do: introduce the characters, establish the setting, and make us laugh. Success across the board, despite this feeling at once timeless yet hopelessly dated (a landline… in the dorm room?). 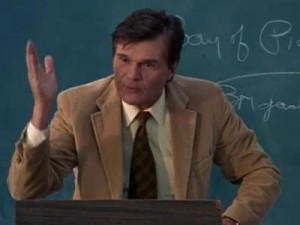 “Oh, So You Have a Boyfriend?” (B+)
It’s a little slicker, and continues the relationship arc between Steven and Lizzie, this episode’s not quite as funny, mainly because I’m not as invested in Lloyd’s story. Oh, to have his problems. But the show makes up for it with the incomparable Fred Willard as Marshall’s history professor. I want an entire episode with him. 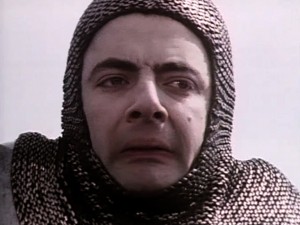 “The Foretelling” (B+)
You have to cut a show like this some slack, considering it’s 30 years old at this point. (Yes, that makes it older than me. In fact, its first three seasons aired before I was even born.) But it’s potent balance of satire and silliness never go out of style. It’s a little slow by today’s standards, but this premiere has Peter Cook. And if you don’t find Peter Cook one of the funniest human beings to ever live, I don’t want to know you. 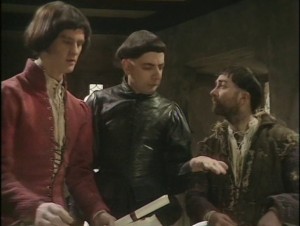 “Born to be King” (B+)
A little bit of a retread of the premiere, but there’s lots of brilliant anachronistic and anarchic humor here. Like many of the best comedic creations over the last three decades, Blackadder is a person whose lust for power is matched only by his incompetence. I see the seeds of Michael Scott in this fool.