Portrait of the artist as an early retiree 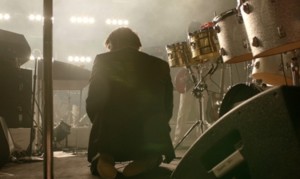 James Murphy, during his last night fronting one of the most important bands of the last decade. (Oscilloscope)

One of my biggest regrets will be never seeing LCD Soundsystem in concert. On April 2, 2011, James Murphy’s pioneering dance-rock band played its version of the Last Waltz to a sell-out crowd at Madison Square Garden. Now, they’re no more. But thanks to this fascinating rock doc, that night can go on forever.

As to be expected from anyone who’s listened to the band’s three albums, the concert portion of the film is exhilarating. But also considering the depth of James Murphy’s lyrics, the rest engages us intellectually as Murphy, in the aftermath of perhaps the greatest show of his life, wonders if he made the right call by disbanding.

He’s goaded on an in interview with Chuck Klosterman that volleys between amiable and contentious, forcing Murphy to give straight answers. This makes Shut Up and Play the Hits much heavier than other rock docs.

Occasionally, though, and this is the only thing keeping the movie from perfection, is Murphy’s self-consciouness. That’s been a hallmark of his music from the beginning. But it makes you wonder how much that seeped into the film. Is he really that mopey the day after? Are those tears real, or manufactured for us? He’s never been disingenuous in his music, which makes those scenes suspect. I’m not saying it’s all show, but the fact that thought crossed my mind makes me curious.

If you missed the one-night-only event on Wednesday, you’ll just have to wait for the DVD, which currently has no release date. But since it’s being put out by the late MCA’s studio Oscilloscope, you can bet it will delve even deeper into the man behind the great music.