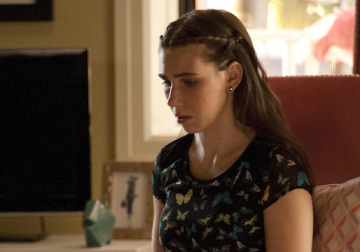 The alternate title for this finale could have been “Grow the F*** Up.” Almost every character gets told this on some level, and many of them don’t respond well.

Including me. The last five minutes made me angry, like, really angry. Maybe that just makes me a cynic, but I honestly don’t think Hannah deserves happiness, at least not right now. I want her to hit rock bottom, miss her deadline, get some honest-to-God help for her anxiety without having anyone rescue her, and then maybe find some respite.

The real problem with the big romantic comedy-style ending, with Adam running across New York and breaking down the door of Hannah’s apartment, is that it feels entirely phony. Even if I hate Hannah right now, that doesn’t change how out-of-place the whole thing feels after an episode so bleak.

Besides, Natalia is superior in every way to Hannah. She’s independent, genuine, loyal and gorgeous, all things Hannah has trouble with, especially lately. But it’s not surprising that Adam, always inscrutable, runs from a relationship that has structure and a viable future.

Yet this episode wasn’t a total wash. While I’m disappointed Shoshanna left Ray, especially for someone who seems like a blond douchebag, I’m glad he’s finally got some motivation to make something of himself. And will Marnie and Charlie become insufferable yuppies? That’s for next season, but they’re not headed toward being more likable, either one.

Even with all the sloppiness of this episode, there were two great moments, from two guest actors, essentially playing the same scene. Peter Scolari—great as always—finally stops being the “good cop” to Hannah, tired of nearly three decades of covering for her ridiculousness. He deserves an Emmy. Almost as good is Jon Glaser as Laird, whose haircut and verbal undressing of Hannah proves that sometimes the smartest one in the room isn’t the one with a book deal.

This was a truly unsatisfying finale to an unsatisfying season, but there’s still enough good that I’ll keep coming back. Nothing will top that first season, but I’ll definitely be back in January.

Bitch of the week: While such a harsh term may not apply this week, Hannah is easily the most insufferable, who deserves to get sued for all $12 in her bank account.

“What’s a girl like you doing in a place like this?” (for a character who barely makes an appearance): Natalia, who’s too good for Adam. Maybe Ray’s available?