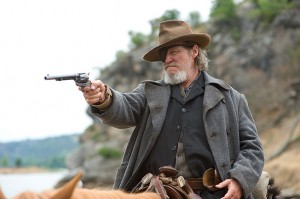 I feel like there’s no way to begin this review but by saying that if you’re swearing off this because you’re too loyal to John Wayne, you need to get over it because you’re missing out on one of the best films of the year.

Jeff Bridges re-claims the role of Rooster Cogburn with authority. Watching him onscreen is simply more enjoyable than any other actor working today. His performance here is truly larger than life, just as John Wayne was back in 1969.

But the show here belongs to newcomer Hailee Steinfeld. All this campaigning for Best Supporting Actress is simply a way to make it easier for her to win some much deserved awards. She’s in nearly every frame and carries it on her shoulders. She could merely be snippy, quoting the Coens’ rich dialogue and would be just fine. But the beauty of her performance–the real wow factor, despite this being her first feature–is how she remains steadfast throughout and then reveals the vulnerability a 14-year-old is supposed to have.

Yet this is no dreary Western like the Assassination of Jesse James. In fact, it’s almost a misnomer to categorize this as a drama. The crisp dialogue and back-and-forth between Steinfeld and any man she encounters, and between bickering law enforcers Bridges and Damon, is so good, so funny, the bleak images and tense scenes are that much more intense.

That’s why the Coen brothers are pure filmmakers. They don’t merely direct scenes. They orchestrate. In this story, they orchestrate believability into the story of a 14-year-old girl setting off into the wilderness to avenge her father’s death. They orchestrate brilliant character arcs as Bridges goes from trigger-happy legend to slovenly drunkard to self-sacrificing hero and Damon goes from prissy vendetta-holder to genuine hero.

The heavenly cinematography from Roger Deakins and wistful score from Carter Burwell are great, but to be expected at this point. What really kicks this movie from coasting by on greatness, into something extraordinary its revelatory third act.

Josh Brolin and Barry Pepper make cameos as some particularly nasty villains but with very different styles. The inevitable showdown doesn’t appear as it would be expected, but still arrives in glorious fashion. That final third is the only part of True Grit that’s wholly unpredictable, but that’s not to discount the first hour-and-a-half.

True Grit ultimately is about juxtaposition, and who better to mix so many opposing elements and blend them into one fantastic symphony than the Coens? This is yet another fine example of movie that works on every level and then some. It don’t get much better’n this.