A superhero movie that lives up to its adjective 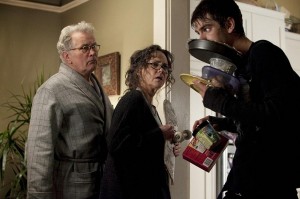 Talk about your hunger games. (Sony)

The Amazing Spider-Man is a movie that could make you cynical. It arrives only five years after the last film in the series and 10 years after the game-changing original debuted. That screams of Hollywood’s lack of thought, patience and originality.

Thankfully, Marc Webb’s foray into Hollywood blockbusters blasts through all that with a stylish reboot that covers much of the territory from the first film while blazing a new trail, with better actors and a different tone.

Andrew Garfield (28 but baby-faced) plays the teenage Peter Parker, much more prone to extreme emotions than Tobey Maguire’s take on the photographer. He still lives with Uncle Ben (Martin Sheen, in need of some Polident) and Aunt May (Sally Field), filling in for the deceased Cliff Robertson and Rosemary Harris. And he’s haunted by the memory of his long-gone parents, who left him with Ben and May one rainy night, never to return.

He’s also infatuated with Gwen Stacy (Emma Stone), a fellow student who notices him right away, unlike the borderline-snobby Mary Jane Watson from the first franchise. She’s cool and down-to-earth and interns for Dr. Curt Connors (Rhys Ifans), a former partner of Peter’s dad.

It’s at this office where Peter gets bitten by that fateful spider, which he later realizes gives him superpowers, in sequences both intentionally funny (set to Phantom Planet’s “Big Brat”) and unintentionally (set to Coldplay’s “‘Til Kingdom Come”). This is all info we got 10 years ago–including the murder of Uncle Ben–but Webb tells it gracefully, adding extra weight to Peter’s emotional rollercoaster.

Meanwhile, Dr. Connors grows desperate with his research–injecting humans with animal DNA to cure diseases–making himself the first human trial subject. The serum works, almost too well, turning him into a giant lizard.

Now, I say giant, but here’s where Webb admirably uses restraint. This lizard is only seven or eight feet tall. Too many summer movies make the antagonistic creature several stories tall, stretching any last remaining suspension of disbelief past the breaking point.

I also have to commend the special effects crew, because the interaction of the real and animated subjects sets a new bar. I’d say the effects here are even better than they are in The Avengers.

The rest of the movie unfolds as you might imagine, but it’s told in splendid 3-D (again, setting a new bar) with a talented cast. Here’s to the start of another great franchise.