A portrait of a prisoner to pleasure 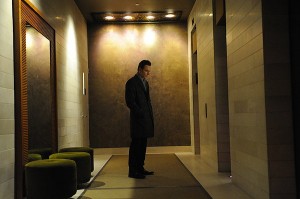 Despite outstanding cinematography and the upscale Manhattan setting, nothing in Shame appears glamorous or inviting.

Our protagonist Brandon (Fassbender) appears to have it all: a successful job, a nice apartment in one of the most expensive cities in the world, and good looks that make attracting glances from women–single, married or otherwise unavailable–far too easy.

But as Brandon awakens in the opening moments of the film, all he can do is stare up at the ceiling. Nothing in his life brings him any pleasure because his secret addiction is eating away at him. Brandon’s drug is not crack cocaine or alcohol but sex. Every action he takes has one goal in mind: an orgasm. Yet the momentary sensation provides no release. He must always be on the hunt for more.

When his troubled sister (Mulligan) shows up at his doorstep, he takes her in, yet still believes he can continue his life as it is, uninterrupted. Cissy believes she can help Brandon, too. As it’s been a long time since they’ve had any contact, she knows something is wrong with him. One terse exchange suggests she knows about his secret life. Yet she’s ill-equipped to provide any sort of help because she’s equally damaged. She throws herself at Brandon’s obnoxious friend after a few hours.

Shame as a whole is not as impressive as I would have hoped, but individual scenes stand out as some of the year’s best. Director Steve McQueen gained notoriety for his long takes in his debut Hunger, also starring Fassbender. The technique, used frequently here, gives the film added tension, whether it’s in those challenging sex scenes or the harsh conversations between Brandon and Cissy.

Early on, these brother-sister moments feel pretty pedestrian and lightweight. At times, Shame is so icy and detached it’s hard to connect with these characters at all. But halfway through, there’s a key scene that takes place at a gorgeous hotel overlooking New York Harbor that’s absolutely heartbreaking. And so begins Brandon’s deep, dark spiral that ends in near-tragedy.

Shame earns its NC-17 but no sex scene titillates, but rather serves a graphic depiction of a man trapped in a lifestyle of self-destructive behavior. As such, it’s a must-see.