2017 in Review: The Best Performances – Television

In an effort to highlight even more of the best TV of the year, I’ve added a Best Ensemble category. I spread the love a little bit this year, partly because there was a lot of turnover in my favorite shows that didn’t come back for one reason or another, and because there were a lot of newcomers worth highlighting.

Best Actor in a Drama Series 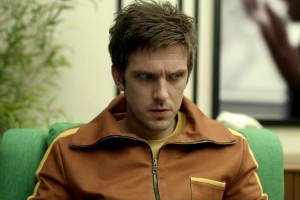 Dan Stevens in Legion
When Stevens asked for his character to be killed off on Downton Abbey, many asked why he’d get off the gravy train so early, let alone to try something as fickle as American movies and TV? It took a while, but this year the gamble finally paid off. In addition to being in the year’s biggest movie (Beauty and the Beast), as well as two low-key charmers (The Man Who Invented Christmas and Colossal) among others, Stevens gave one of the best performances of the year as David on FX’s X-Men-adjacent series. Stuck with a mind that might either be the most powerful on earth, or just afflicted with mental illness, Stevens handles all the complex emotions brilliantly. This is a show obsessed with psychology and identity, and he kept it from ever feeling repetitive.

Best Actress in a Drama Series 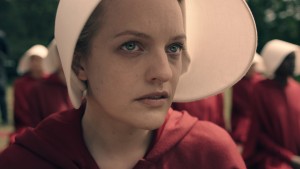 Elisabeth Moss in The Handmaid’s Tale
In a grand bit of irony, Moss brilliantly plays a woman trapped in a cult, while she’s trapped in one in real life. As Offred, the formerly independent wife and mother forced into sexual slavery, Moss carries the quiet rage on her face, and every act of defiance (whether that be kindness, deception or having an honest-to-God orgasm) registers even deeper. 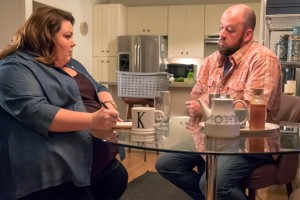 Chris Sullivan in This Is Us
It’s no surprise this show includes a tissue box emoji in its official hashtag, because the show is here for the express purpose of giving you a good cry every week. (Lord help all the newbies who get blindsided with its post-Super Bowl episode in 2018.) And while the core trio is doing the heavy lifting with the big storylines (fostering for Randall, a pregnancy for Kate and addiction for Kevin), Sullivan is quietly doing the best work on the show under that fat suit. In Kate’s story, which – spoiler alert – ended in a miscarriage, Sullivan underplayed every moment, saving the big emotion for his powerful speech to Kate (Chrissy Metz), letting her know that he’s in just as much as pain as she is, and to deny him that is cruel. It’s stellar work. 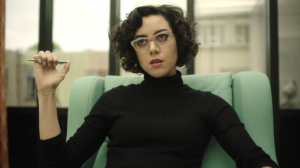 Aubrey Plaza in Legion
Plaza was magnificent (as was everyone) on Parks and Recreation. But since that show went off the air, no project has managed to capture her mix of dark humor, sass and allure. That is, until Legion. She begins the show as one of David’s only friends, until the season slowly reveals that not only is she not flesh and blood, she’s actually the (literal) demon that’s haunted him for most of his life. Most shows would turn her into an actual scary witch at this point, but Legion would rather tease out the horror, leaving room for her captivating dance to “Feeling Good.”

Best Ensemble in a Drama Series 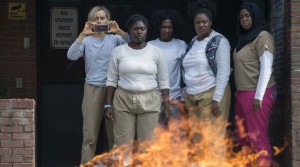 Orange Is the New Black
By this point, there’s not a whole lot that can be revealed about long-time characters on this show. Yet all their history that we’ve seen over the course of four seasons comes to a head this season as the inmates take over the prison, demanding justice for Poussey and basic improvements in their daily lives. Their alliances are fraught and their motivations not always pure, but together their stand feels greater than any one individual performance.

Best Actor in a Comedy Series 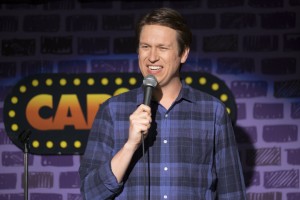 Pete Holmes in Crashing
Most sitcoms based on the real-life experiences of the stand-ups that star in them either make their lead the straight man to the craziness around him (Seinfeld) or have them be unlikable to the point that they’re almost the villain of their own story (Louie). Crashing chooses Option C: making Pete exceedingly cheerful even as his life is falling apart. While he’s not a perfect guy and still has a lot to learn (or else this show wouldn’t have made it past this season), Holmes’ astonishing warmth and decency makes him unlike nearly any character on TV.

Best Actress in a Comedy Series 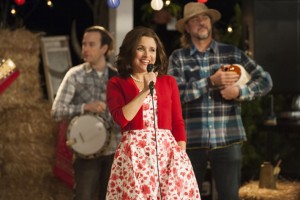 Julia Louis-Dreyfus in Veep
We’re six seasons in, and few women have even come close to topping Julia Louis-Drefus’ performance on this landmark series. Even though I liked this season the least of all of them, Selina out of the White House brought out her worst tendencies, selfishly ignoring those closest and most loyal to her for even the possibility of a bigger spotlight. It’s far more than just perfect line delivery. 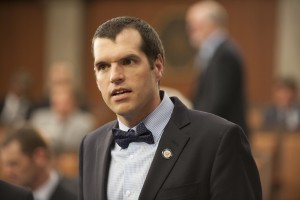 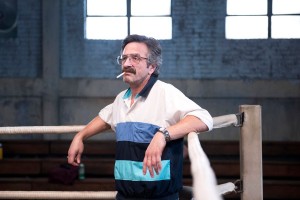 Timothy Simons in Veep AND Marc Maron in GLOW (tie)
I didn’t want to have a tie for any of these spots, yet I remain torn here. Simons has been crushing it as the put-upon Jonah for several seasons, and now that he has some modicum of power, he’s going to use it to lash out at all the people who ignored him. It’s been building, but this is his greatest moment on the show. Maron, on the other hand, arrived fully formed as Z-grade director/wrestling producer Sam Sylvia. As has been pointed out elsewhere, he’s even better here than he was on his sitcom Maron, WHERE HE PLAYED HIMSELF. Sam is bitter but still hopeful. Life has beaten him down, but not to the point where he won’t help out other people. His dramatic peak: taking Ruth (Alison Brie) to the abortion clinic. His comedic peak: asking a band at a house party if they’ve got drugs, and when they say no, gleefully informing them that he does. 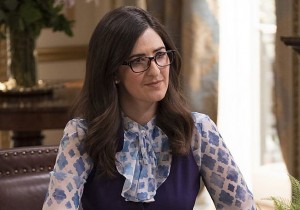 D’Arcy Carden in The Good Place
One of the many, many incredible things this show has done in its second season is deepen the character of Janet. I don’t know how you give a robot more life, but the writers have given her an actual emotional register and Carden has more than risen to the challenge, as she experiences heartbreak over Jason, trauma over being rebooted hundreds of times and confusion over her mistake of creating a rebound boyfriend (Jason Mantzoukas).

Best Ensemble in a Comedy Series 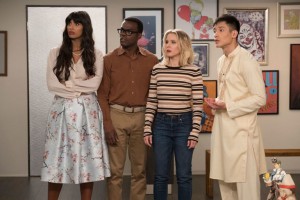 The Good Place
But really, everyone on this show is doing absolutely magnificent work. Half the cast I’d never seen before this show, but they’re all playing their characters note-perfect. The character flaws we saw exposed in Season One become defining traits in Season Two, even as they’re all learning (except maybe Jason) to become better people.

Best Actor in a Limited Series 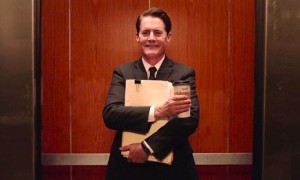 Kyle MacLachlan in Twin Peaks
Whatever successes and failures this revival had, absolutely none of it would have worked were MacLachlan not acting his ass off in (at least) three roles: as the noble Dale Cooper, the evil Dark Coop and amiable doofus Dougie Jones. It was magic to watch him onscreen, no matter which version he was playing. It’s the kind of acting challenge few performers ever get, and MacLachlan passed with flying colors.

Best Actress in a Limited Series 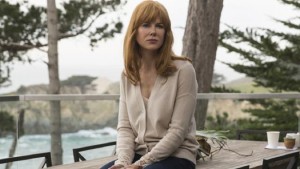 Nicole Kidman in Big Little Lies
This miniseries featured a powerhouse of great performances (as I’ll note later). But Kidman stood out from the rest, because her character has the least firm grasp on who she really is. A victim of domestic abuse who sticks around for the kids and the sex, her tentative therapy sessions give way to a full reassessment of her life. In a year (and a career) full of exceptional performances, this might be her very best one yet. 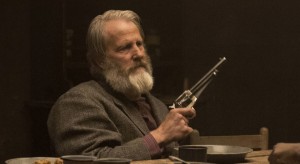 Jeff Daniels in Godless
Daniels was stupendous as the hot-headed TV host on The Newsroom (yes, I’m going to beat that drum forever so save your breath and your @’s), but he’s never been given a TV role as dark and complex as Frank Griffin, the ruthless leader of an ever-dwindling band of robbers. He’s also a father figure to Roy Goode (Jack O’Connell), which makes their inevitable showdown feel Oedipal, if not downright biblical. Though missing an arm, Frank is no less dangerous. He’s as quick with a word as he is with a pistol, relentless in his pursuit and merciless to anyone who gets in his way. 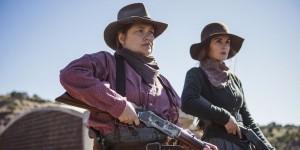 Merritt Wever in Godless
While she’s shown spunk on Nurse Jackie and The Walking Dead, she’s also never had as rich a character as Mary Agnes before. Like nearly every other woman in La Belle, she’s also a widow. But unlike most of them, she refuses to stay in her grief, providing for and defending her family, and also taking up a new lover (local schoolteacher Callie). She’s tough and wears men’s clothes, yet she continually defies any lesbian stereotypes. She’s the most well-written character, but it took someone with Wever’s gifts to bring her to life.

Best Ensemble in a Limited Series

Big Little Lies
The dudes on this show play their roles exactly as they need to be played, but c’mon. This show belongs to its incredible cast of women, especially its core trio. Zoe Kravitz and Laura Dern both play important parts. But it’s Shailene Woodley (with the hardest part to pull off) as working-class mother Jane, Reese Witherspoon as the seemingly put-together Madeline, and Nicole Kidman as the abused Celeste that made this show so addictive and so good. Their unlikely friendship is forged by the fateful event at the end of the show, but its the little moments along the way that made it feel so believable and powerful.