The Weekender: Moviegoers ‘in Distress’

The Lucky One (PG-13)
Starring Zac Efron, Taylor Schilling, Blythe Danner
Written for the screen by Will Fetters
Directed by Scott Hicks
As usual, this Nicholas Sparks adaptation exceeds your daily recommended allowance of sap. Expect bad acting, lengthy sex scenes and one killer performance from an old person. At least it’s better than Dear John or The Vow. Read my review for Pegasus News here.

Think Like a Man (PG-13)
Starring Kevin Hart, Meagan Good, Taraji P. Henson
Written for the screen by Keith Merryman & David A. Newman
Directed by Tim Story
I’m a huge Steve Harvey fan, but only when he’s doing stand-up or hosting Family Feud. His book may reveal some truths that could have easily been determined after a few moments in thought, but why do we really need a black version of the already terrible He’s Just Not That into You? I mean, I think more African-Americans need to be employed in movies, and not just as sidekicks. Sadly, the only big-profile releases they get are this and whatever five movies Tyler Perry is working on this year.

Chimpanzee (G)
Directed by Alastair Fothergill and Mark Linfield
This doc seems to raise some questions about its authenticity (at least from me), but look how cute that baby chimp and his simian caretaker are!

Damsels in Distress (PG-13)
Starring Greta Gerwig, Adam Brody, Analeigh Tipton
Written and directed by Whit Stillman
I won’t pretend like I know anything about Whit Stillman, other than he is revered as a god of ’90s indie cinema. His first film since The Last Days of Disco bombed in 1998, Damsels in Distress looks like a nerdy girls’ version of Old School, with their leader (Gerwig) quoting literary elites instead of classic rock. That’s probably not going to sell it to fans of Stillman or Will Ferrell, so let’s just let the above trailer do the talking.
PLAYING AT BOTH ANGELIKAS

Marley (PG-13)
Directed by Kevin MacDonald
Buzz is strong (no pun intended) for this lengthy doc on reggae pioneer/frat boy liberator Bob Marley. The movie is also streaming on Facebook this 4/20, so you can be in the right, um, environment to appreciate it.
PLAYING EXCLUSIVELY AT THE ANGELIKA DALLAS

The Deep Blue Sea (R)
Starring Rachel Weisz, Tom Hiddleston, Simon Russell Beale
Written for the screen and directed by Terence Davies
It may only be April but Rachel Weisz is already getting Oscar buzz as the woman torn between two men. One is her distant but well-off husband (Beale). The other is an impulsive but passionate Royal Air Force pilot (Hiddleston). It could likely receive my Revolutionary Road Award for the Year’s Most Depressing Movie. Previous winners include Never Let Me Go and Precious.
PLAYING EXCLUSIVELY AT THE MAGNOLIA

Also opening:
The Magnolia: The Salt of Life (NR), The Skinny (NR) 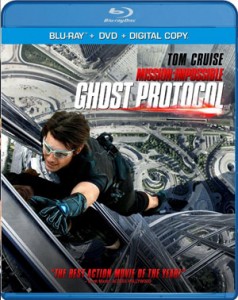 Mission: Impossible – Ghost Protocol (93%)
Last year’s best blockbuster is now ready to take home. Even though Tom Cruise was approaching 50, even though the Mission: Impossible III was the franchise’s lowest earner, even though Brad Bird had never directed a live-action movie before, Ghost Protocol rocked. It defied all expectations to become a hit with critics and audiences alike. I just hope it’s less than five years until the next one.

To buy:
Music: Grateful Dead: All the Years Combine

Blu-ray: Buck Privates*, In Too Deep