The Weekender: ‘Wanted,’ dead or alive

Madagascar 3: Europe’s Most Wanted (PG)
Starring the voices of Ben Stiller, Chris Rock, Jada Pinkett Smith
Screenplay by Eric Darnell and Noah Baumbach
Directed by Eric Darnell, Tom McGrath, Conrad Vernon
Get ready for another round of underachieving animated comedy from DreamWorks, this time finding our zoo escapees on the run, hiding out with some circus animals.

Where Do We Go Now? (PG-13)
Starring Claude Baz Moussawbaa, Leyla Hakim, Nadine Labaki
Written by Rodney Al Haddid, Thomas Bidegain, Jihad Hojeily, Nadine Labaki, Sam Mounier
Directed by Nadine Labaki
After winning the coveted People’s Choice Award at last year’s Toronto International Film Festival, buzz was strong for this Lebanese dramedy about women who try to ease religious tensions in their village. But a Best Foreign Language Film nod at the Oscars never materialized, and it’s now going relatively unnoticed, even in a relatively strong year for foreign films at the art-house box office.
PLAYING AT THE MAGNOLIA and THE MODERN ART MUSEUM OF FORT WORTH

Also opening:
Cinemark Legacy: Every Breath U Take (PG-13) — Having watched the trailer, I think this could be the worst movie ever made…

It’s Human Rights Doc Weekend at the Texas Theatre. Check their website for showtimes and titles.

AT HOME (click links to watch on Netflix):
Top Pick: 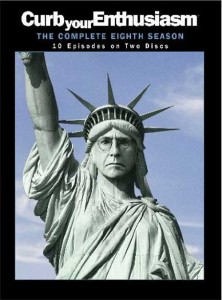 Curb Your Enthusiasm (Season 8)
A move back to New York was just what Larry David needed to revitalize the show—and maybe even top it—after Season 7’s Seinfeld reunion which aired all the way back in 2009. This season features such classics as “The Palestinian Chicken” (about Larry’s unease at enjoying the enemy’s cuisine), “The Bi-Sexual” (in which he fights Rosie O’Donnell for the affections of a woman) and “Larry vs. Michael J. Fox” (self-explanatory).

To buy:
Music: John Mellencamp: It’s About You, Paul Simon: Under African Skies

Blu-ray: Blood Work, Cocktail, The Color of Money, Erin Brockovich, The Grapes of Wrath*, Hondo, A Perfect World, Ransom, Scent of a Woman, Sea of Love, Seven Days in Utopia, Smokey and the Bandit, The Sting, U.S. Marshals*, Yellow Submarine, Zorba the Greek

One Response to The Weekender: ‘Wanted,’ dead or alive