The Weekender: Walking in ‘Memphis’

Hansel and Gretel: Witch Hunters (R)
Starring Jeremy Renner, Gemma Arterton, Famke Janssen
Written by Tommy Wirkola & Dante Harper
Directed by Tommy Wirkola
I keep waiting for Renner to reveal this is all just a joke, but apparently it’s not. I have no idea why this movie got made, but the best any of us can hope for is a so-bad-it’s-good effort like Wirkola’s last film, the Nazi zombie horror-comedy Dead Snow.

Movie 43 (R)
Starring Emma Stone, Hugh Jackman, Halle Berry
Written and directed by all kinds of funny folks, this series of shorts harkens back to the days of Kentucky Fried Movie. Any hopes that this will achieve the heights of the ZAZ team’s first effort need to be seriously tempered, but I imagine there will be plenty to crack up/be disgusted at during this film.

Parker (R)
Starring Jason Statham, Jennifer Lopez, Michael Chiklis
Written for the screen by John J. McLaughlin
Directed by Taylor Hackford
Despite the pedigree (McLaughlin wrote Black Swan, Hackford directed Ray), this movie could not feel more generic, even by Statham’s standards. See, there’s a heist, and a double-cross, and revenge, and some sex with a woman who initially finds Statham repulsive…

Quartet* (PG-13)
Starring Maggie Smith, Billy Connolly, Pauline Collins
Written for the screen by Ronald Harwood
Directed by Dustin Hoffman
Or as I like to call it: The Best Exotic Hard Rock Hotel. Connolly, Collins and Tom Courtenay play three friends at a retirement home for musicians. Their lives get upended when Smith—who broke up their quartet years earlier—arrives at the home. The stakes are very low, but the banter is quite delightful. Dustin Hoffman’s direction is unremarkable (as are most adaptations of stage plays), but this a thoroughly enjoyable time at the movies featuring some terrific performances.
PLAYING AT BOTH ANGELIKAS

West of Memphis (R)
Directed by Amy Berg
Though already pretty well-covered in Paradise Lost trilogy, this doc, produced by Peter Jackson, tells more succinctly the heartbreaking tale of the West Memphis Three, a trio of teens railoraded by a corrupt justice system who pinned the murders of three boys on them, going off little more than their appearance.
PLAYING AT THE ANGELIKA DALLAS and CINEMARK WEST PLANO 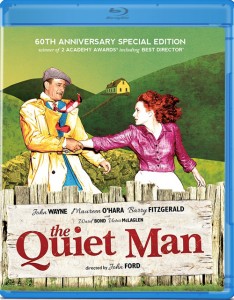 The Quiet Man
We all know John Ford and John Wayne’s Westerns (there’s even a box set), but you could make a strong case that their strongest collaboration was this Irish-set romance about an ex-boxer sworn to pacificism. The cinematography is gorgeous and so is Maureen O’Hara. My uncle has made this required viewing at his annual St. Patty’s parties and it’s easy to see why.