The Weekender: The Pre-Holiday ‘Trip’

The Guilt Trip (PG-13)
Starring Seth Rogen, Barbra Streisand, Colin Hanks
Written by Dan Fogelman
Directed by Anne Fletcher
Casting Streisand as an overbearing Jewish mother is a little too easy, but the director of The Proposal knows how to make tired material entertaining and watchable. Babs plays Rogen’s mom, and accompanies him on a cross-country road trip. Imagine the hijinks they could get into!

This is 40 (R)
Starring Paul Rudd, Leslie Mann, Albert Brooks
Written and directed by Judd Apatow
I was a staunch defender of Funny People, although this looks to avoid that movie’s darker themes. Rudd and Mann are a great comic duo, so I’ll be excited to see anything they do, even if it extends beyond two hours.

Jack Reacher (PG-13)
Starring Tom Cruise, Richard Jenkins, Rosamund Pike
Written for the screen and directed by Christopher McQuarrie
Much has been written about how Cruise is too scrawny and mouthy to play the stoic giant of Lee Child’s novels. Still, reviews are solid for a gritty action movie that probably needed an R rating to best tell its dark story about a sniper terrorizing Pittsburgh, but got cut to a PG-13 to maximize its profits. Regardless, I’m actually excited for this one, even if most people seem Tom Cruise’d out.

Rust and Bone (R)
Starring Marion Cotillard, Matthias Scohenaerts, Armand Verdure
Story by Craig Davidson
Screenplay by Jacques Audiard & Thomas Bidegain
Directed by Jacques Audiard
Oscar buzz for Marion Cotillard is strong for this depressing French romance. After an accident leaves her without her legs, she runs into the embrace of single dad Matthias Scohenaerts (Bullhead).
PLAYING AT BOTH ANGELIKAS

Barbara (PG-13)
Starring Nina Hoss, Ronald Zehrfled, Rainier Bock
Written and directed by Christian Petzold
In the usual swirl of foreign language films competing for the Oscar, Germany’s official entry could get lost in there. Reviews say it shouldn’t, mainly because of Nina Hoss’s performance as a pediatrician being monitored by the Stasi in East Germany.
PLAYING AT BOTH ANGELIKAS 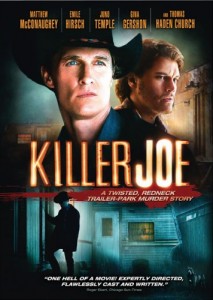 Killer Joe (77%)
There are actually quite a few great movies to rent this week, including the bawdy musical Pitch Perfect, Mike Birbiglia’s melancholy Sleepwalk with Me and the baseball/family dramedy Trouble with the Curve. But I have to pick the one you were least likely to have seen: William Friedkin’s pitch-black comedy Killer Joe. It features Matthew McConaughey’s best performance of his comeback year as a corrupt Dallas cop who terrorizes a bunch of yokels who hire him, then can’t afford to pay him. It has to be seen to be believed and earns its NC-17 rating. It’s not for the faint of heart, but those who can handle this down-and-dirty neo-noir will love it.