The Weekender: The Loneliness of the Long-Distance ‘Runner’

Gravity (PG-13)
Starring George Clooney, Sandra Bullock, Ed Harris
Written by Alfonso & Jonás Cuarón
Directed by Alfonso Cuarón
Here it is: the movie I’ve been waiting several years for. Cuarón’s labor of love promises to be a visual feat, one that deserves to be witnessed on the largest screen possible. Bullock and Clooney play astronauts separated from their spacecraft, trying to make their way back to the space station. It sounds thrilling and daring and the kind of smart, big-budget sci-fi film that comes along so rarely.

Parkland (PG-13)
Starring Paul Giamatti, Billy Bob Thornton, Marcia Gay Harden
Written and directed by Peter Landesman
The other Kennedy brother gets the Bobby treatment: a star-studded cast in a mediocre movie about people who happened to be there during the assassination.
PLAYING AT BOTH ANGELIKAS

Wadjda (PG)
Starring Waad Mohammed, Reem Abdullah, Sultan Al Assaf
Written and directed by Haifaa Al-Mansour
Saudi Arabia’s official selection for the Oscars is this drama, the first from that country to be directed by a woman. Mohammed plays the title character, a spunky girl who hopes to win a Koran recitation contest to get the money she needs for a bicycle. If it sounds like the kind of dull foreign movie you wouldn’t want to see, the reviews are outstanding and the movie is said to possess a lot more excitement than that description seems to provide.
PLAYING AT BOTH ANGELIKAS

Bad Milo (R)
Starring Ken Marino, Gillian Jacobs, Patrick Warburton
Written by Benjamin Hayes & Jacob Vaughn
Directed by Jacob Vaughn
Halloween comes early this year in this comedy about an overworked guy whose stresses manifest themselves as a little hellion, which looks like Baby Sinclair on crack.
PLAYING EXCLUSIVELY AT THE TEXAS THEATRE 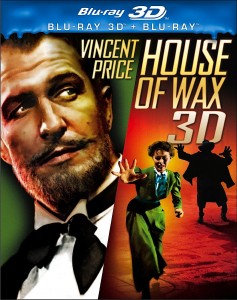 House of Wax
One of my favorite B-horror pictures as a kid was this Vincent Price thriller. It doesn’t have the camp value of The Tingler or the emotional throughline of The Abominable Dr. Phibes, but it’s chilling and entertaining nonetheless. This Blu-ray edition offers a remastered picture, including the 3-D version, which hasn’t been seen publicly in years.

Blu-ray: The Amityville Horror Trilogy, The Big Parade, From Here to Eternity, The Little Mermaid*, Stuck on You, Torn Curtain, Vital Signs, Volcano*