The Weekender: ‘Slave’ to rhythm

The Counselor (R)
Starring Michael Fassbender, Penelope Cruz, Javier Bardem
Written by Cormac McCarthy
Directed by Ridley Scott
I could not have anticipated this movie more earlier this year, but the buzz has ranged from good-not-great to WTF. Thus, my enthusiasm has dwindled. Still, with a cast and crew this talented, it will at least be worth seeing once. Plus, the comparisons to Killing Them Softly give me hope.

Bad Grandpa (R)
Directed by Jeff Tremaine
Even though I never watched the show, I kind of enjoyed the movies, particularly the third one. But the Bad Grandpa character played by Johnny Knoxville was always the least interesting part. So I’m not too thrilled about a whole film with him. Shockingly, the reviews are decent.

12 Years a Slave (R)
Starring Chiwetel Ejiofor, Michael Fassbender, Benedict Cumberbatch
Written for the screen by John Ridley
Directed by Steve McQueen
And here we come to the buzziest film of the year. The glowing reception it received at Toronto led some critics to prematurely declare it the Best Picture winner. Its tough subject matter might keep it from winning, especially since it’s not meant to be cathartic. Still, count on plenty of acting and technical nominations as well as a film you’ll never forget.
PLAYING AT BOTH ANGELIKAS 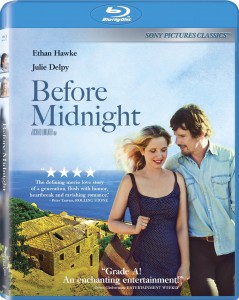 Before Midnight (98%)
Probably the best movie I’ve seen all year. Filmed in bracing long takes, the conversations between Jesse and Celine – now married for nearly a decade after reconnecting in Paris – are honest and hilarious. It’s both funny and sad, happy and angry, because it captures all the ups and downs of marriage in microcosm. Julie Delpy is magnificent as always, even if Celine sometimes seems unreasonable. Ethan Hawke matches her, even if Jesse is a little too laid back about everything.