Playing for Keeps (PG-13)
Starring Gerard Butler, Jessica Biel, Dennis Quaid
Written by Robbie Fox
Directed by Gabriele Muccino
For some reason, the first weekend of December tends to be when studios clear out their leftovers. This is Fox’s chance to dump this romantic comedy featuring Gerard Butler (who keeps getting cast in these movies despite being ill-suited for them) as a single dad who starts coaching his son’s soccer team, then finds himself the object of desire of the soccer moms while he tries to patch things up with his ex-wife.

Lay the Favorite (R)
Starring Bruce Willis, Catherine Zeta-Jones, Rebecca Hall
Written for the screen by D.V. DeVincentis
Directed by Stephen Frears
You know a movie has to be bad when it’s opening at the dollar theater. This is even more disappointing considering the writer and director are responsible for one of my all-time favorite movies High Fidelity. Looks like you can lay this Vegas-set romantic comedy in the garbage.
PLAYING AT CINEMARK PLANO AND CINEMARK LEWISVILLE (Discount Theaters)

The only other movies opening this week are documentaries, so let’s briefly look at each one.

The Flat (NR)
Directed by Arnon Goldfinger
This doc follows the director cleaning out the home of his grandparents, who left Germany during WWII. He might not like what he finds.
PLAYING EXCLUSIVELY AT THE MAGNOLIA

Chasing Ice (PG-13)
Directed by Jeff Orlowski
The Academy recently shortlisted this as one of 15 docs that could be nominated for Best Documentary Feature. It’s about NatGeo photo James Balog’s attempts to chronicle the world’s rapidly shrinking glaciers.
PLAYING EXCLUSIVELY AT CINEMARK WEST PLANO 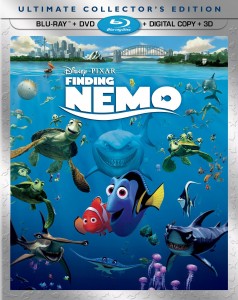 Finding Nemo
This year’s 3-D re-release kept the debate raging: What’s the best Pixar movie? I think seeing it in 3-D and now on Blu-ray for the first time tilts the favor to this ocean-bound fish tale. It features two of the best voice performances of all time and a script that hits exactly the right balance between laughs and heart. Plus, it’s one of the most gorgeous things your eyes will ever behold. I don’t want to throw around the word perfect, but this movie’s pretty close.