The Weekender: I Wanna ‘Rock’

Rock of Ages (PG-13)
Starring Julianne Hough, Diego Boneta, Tom Cruise
Written for the screen by Justin Theroux and Chris D’Arienzo and Allan Loeb
Directed by Adam Shankman
A silly, vulgar musical that has just enough decent moments to save it from complete disaster. Read my review for Pegasus News here.

That’s My Boy (R)
Starring Adam Sandler, Andy Samberg, Leighton Meester
Written by David Caspe
Directed by Sean Anders
I’m a huge fan of Happy Endings, the Friends 2.0 series Caspe created for ABC. But this looks the furthest thing from it. Sandler plays the rock star dad who was too busy getting DUIs to play with his son (Samberg). Now he’s going to try to make up for it over the son’s wedding weekend. That’ll work out great.

Safety Not Guaranteed* (R)
Starring Aubrey Plaza, Jake Johnson, Mark Duplass
Written by Derek Connolly
Directed by Colin Trevorrow
One of the most pleasant surprises of the year, this sci-fi comedy hits all the right notes with a witty, perfectly paced script. Read my review for Pegasus News here.
PLAYING AT THE ANGELIKA DALLAS and CINEMARK WEST PLANO

Lola Versus (R)
Starring Greta Gerwig, Zoe Lister Jones, Hamish Linklater
Written by Daryl Wein & Zoe Lister Jones
Directed by Daryl Wein
Buzz is surprisingly weak for this comedy starring indie queen Greta Gerwig. She plays the title character, who has to readjust her life after her fiancé dumps her right before their wedding.
PLAYING AT THE MAGNOLIA and CINEMARK WEST PLANO

Something from Nothing: The Art of Rap (R)
Directed by Ice-T & Andy Baybutt
Ice-T interviews essentially every important living rapper about the genre’s cultural impact and evolution (some would say devolution). Given the breadth of hip-hop’s output and its various regional identities, I don’t see how Ice-T can cover so much ground in a feature, but I’ll sure be willing to find out.
PLAYING AT THE AMC MESQUITE and CINEMARK LEGACY

This Friday also marks the beginning of the Oak Cliff Film Festival. Check the official website for titles and showtimes. 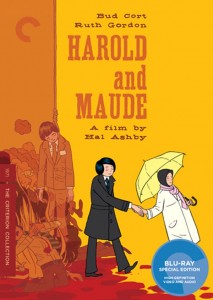 Harold & Maude (The Criterion Collection)
There are great romantic comedies, and there’s Harold and Maude. One of the funniest, loveliest and oddest movies ever to come out in the ’70s, this sweet tale of the friendship between a suicidal teen and a freewheeling septuagenarian is just about as good as it gets. As usual, Criterion has pulled out all the stops for this edition.