The Weekender: Heavy ‘Cross’ to Bear

Paranormal Activity 4 (R)
Starring Katie Featherston, Kathryn Newton, Matt Shively
Screen story by Chad Feehan
Screenplay by Christopher Landon
Directed by Henry Joost & Ariel Schulman
Three years ago, I was ecstatic this movie was No. 1 over Halloween weekend, beating another Saw installment. But as this series continues to be a brand that becomes ever more tangentially related to the first groundbreaking film, I’m wondering what the ceiling is for this franchise.

Alex Cross (PG-13)
Starring Tyler Perry, Matthew Fox, Edward Burns
Written for the screen by Marc Moss and Kerry Williamson
Directed by Rob Cohen
Tyler Perry is a significant downgrade from Morgan Freeman, and certainly from the man first attached to this reboot of the Alex Cross franchise: the incomparable Idris Elba (Prometheus). I can’t help but wonder how good this film would be if he were still in the lead and was directed by anyone other than Rob Cohen (the first Fast and the Furious and the third Mummy movie).

Wuthering Heights (PG-13)
Starring Kaya Scodelario, James Howson, Solomon Glave
Screen story by Olivia Hetreed
Written for the screen by Andrea Arnold & Olivia Hetreed
Directed by Andrea Arnold
No, we didn’t need another version of the Brontë novel, but word from the festival circuit was this was a surprising and refreshing adaptation, focusing on stark visuals and emotions, rather than going through the wig-movie business in its sleep.
PLAYING EXCLUSIVELY AT THE ANGELIKA DALLAS

Keep the Lights On (NR)
Starring Thure Lindhardt, Zachary Booth, Julianne Nicholson
Written by Ira Sachs & Mauricio Zacharias
Directed by Ira Sachs
Buzz is strong for this gay drama, which could become this year’s Weekend.
PLAYING EXCLUSIVELY AT THE MAGNOLIA 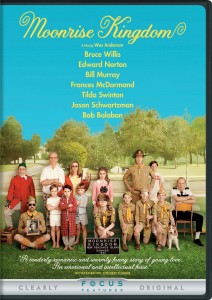 Moonrise Kingdom (94%)
If you’re a fan of Wes Anderson’s hilarious films, or more importantly his aesthetic, you will absolutely flip for Moonrise Kingdom, a paper valentine to young love and ’60s music. But if any of his quirks drive you up a wall, you probably won’t be able to stand this indie smash. I’m firmly in the former camp, so I couldn’t have enjoyed it more. Your mileage may vary.

Blu-ray: Ella Enchanted, Gone in 60 Seconds (1974), A League of Their Own*, Pete’s Dragon, Slender Thread, The Sterile Cuckoo, Suddenly!

Criterion: The Forgiveness of Blood