The Weekender: Every day I’m hustlin’

Anchorman 2: The Legend Continues (PG-13)
Starring Will Ferrell, Steve Carell, Paul Rudd
Written by Will Ferrell & Adam McKay
Directed by Adam McKay
The comedy sequel we’ve all been anticipating finally arrives. Will it reach the highs of Naked Gun 2½ or the lows of Caddyshack II?

American Hustle* (R)
Starring Christian Bale, Bradley Cooper, Jennifer Lawrence
Written by Eric Warren Singer & David O.Russell
Directed by David O. Russell
While it didn’t blow me away like Russell’s previous effort, there’s no denying this is the acting ensemble of the year (give or take an August: Osage County). The story could have used a bit more substance, but this is a genuinely hilarious caper movie about the lies we tell ourselves and each other.

Saving Mr. Banks (PG-13)
Starring Tom Hanks, Emma Thompson, Paul Giamatti
Written by Kelly Marcel and Sue Smith
Directed by John Lee Hancock
Hanks as Disney. Could the guy be anymore likable? Not to P.L. Travers, whom he tries to convince to sell the rights to Mary Poppins so it can become the cultural touchstone it is today.

Walking with Dinosaurs (PG)
Starring the voices of Justin Long, Karl Urban, John Leguizamo
Written for the screen by John Collee
Directed by Barry Cook & Neil Nightingale
Based on the British faux-documentary series and stage production of the same name, this movie probably would have been better served as an IMAX experience and not something that reminds us all of this.

Inside Llewyn Davis (R)
Starring Oscar Isaac, Carey Mulligan, John Goodman
Written and directed by Joel & Ethan Coen
American Hustle was my most anticipated movie of Oscar season. This is No. 2. Isaac plays a folk singer who hasn’t caught his Bob Dylan-like break yet. Plus, he’s got to deal with a pregnant girlfriend, an unwanted housecat and a harsh New York winter. The Coens always make the most interesting, rewatchable films. This is guaranteed to be another.
PLAYING AT ANGELIKA PLANO and THE MAGNOLIA

The Punk Singer (NR)
Directed by Sini Anderson
This rock doc takes a look at Bikini Kill and Le Tigre singer Kathleen Hanna, her iconic status in the alternative music explosion of the early ’90s, her marriage to Ad-Rock and her battle with Lyme disease.
PLAYING EXCLUSIVELY AT THE TEXAS THEATRE 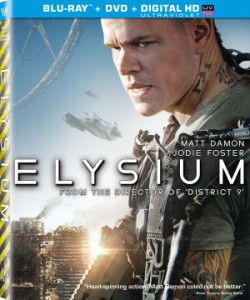 Elysium (69%)
It’s occasionally too on the nose, and the brutal real world is often more fascinating than the utopian space station, but Matt Damon gives another great action performance (possibly surpassing his years as Jason Bourne). Neill Blomkamp has delivered another smart sci-fi movie, one that deserves some re-evaluation after the critics beat it down.

Blu-ray: The Beast Within, The Blue Angel, Crawlspace, The Whip and the Body