The Weekender: All About ‘Her’

The Legend of Hercules (PG-13)
Starring Kellan Lutz, Gaia Weiss, Scott Adkins
Written by Daniel Giat, Renny Harlin, Sean Hood, Giulio Steve
Directed by Renny Harlin
Tell me why we need another Hercules movie, preceding this summer’s version with The Rock. We certainly don’t need one with charismatic black hole Kellan Lutz (one of the other dudes in Twilight) or one that just rips off Gladiator and 300 with special effects that look worse than the Spartacus TV show.

Her (R)
Starring Joaquin Phoenix, Amy Adams, Scarlett Johansson
Written and directed by Spike Jonze
I’m still a little bummed we had to wait so long for this movie (it was originally slated to go wide the first part of December), but better late than never. Joaquin Phoenix plays a lonely writer who falls in love with his operating system. You’d think this is just a beautiful lure for critics, and you’d be absolutely right. But Spike Jonze is one of the best directors working today, so he’ll make it into something beautiful.

Lone Survivor (R)
Starring Mark Wahlberg, Taylor Kitsch, Ben Foster
Written for the screen and directed by Peter Berg
The title is pretty much a spoiler, but Peter Berg is out to redeem himself after the Battleship disaster. This smaller-scale military picture is a step in the right direction. He’s got a great cast to help him there, too.

August: Osage County (R)
Starring Meryl Streep, Julia Roberts, Benedict Cumberbatch
Written for the screen by Tracy Letts
Directed by John Wells
Tracy Letts condenses his own Pulitzer Prize-winning play about a cantankerous family and got a phenomenal cast to join in. Your mileage with crazy families may vary.
PLAYING AT BOTH ANGELIKAS

AT HOME (click the link to watch on Netflix):
Top Pick 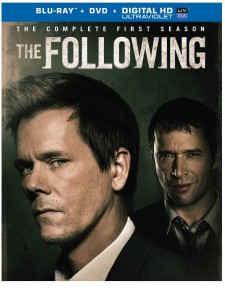 The Following (Season 1)
Yeah, I know it got silly at times and it was far from the smartest show, but I’ll be damned if I wasn’t completely hooked all season. They whiffed it in the finale, but there’s a chance to make up for it in Season 2. This has been on Netflix for a while, and it’s the perfect show to binge on.

Blu-ray: For Ever Mozart, Coal Miner’s Daughter, Gorillas in the Mist, Hail Mary, The Hurricane, The Killing Fields, Tequila Sunrise