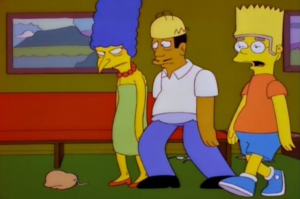 “Raging Abe Simpson and His Grumbling Grandson in ‘The Curse of the Flying Hellfish’” (B+)
This will never be among anyone’s favorite episodes, especially not of the fantastic Season 7. But it’s incredibly well-directed, featuring some absolutely gorgeous scenes. That’s not something you can say about most episodes of this show. Hilarious? Yes. Heartfelt? Often. Beautiful? That’s a special achievement. It also features one plot and only one plot, another aspect that was all too rare in later seasons. Those aren’t huge caveats. It’s still hilarious and humanizes Grampa, who can sometimes be too one-note, even though that note works. Gags like the one above, featuring Burns, an assassin and Smithers as the Simpsons, prove once again this show is a treasure trove. 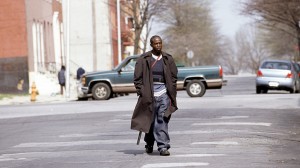 “The Pager” (B+)
The inevitable filler episode. Sure, the plot moves along briskly, but the last 10 minutes are essentially pointless. But yeah, a filler episode of The Wire is better than most dramas would produce in their entire series. Most importantly, this is the first great episode for Omar, who I can already declare the best character on the show. 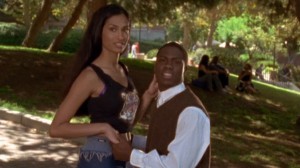 “God Visits” (A-)
A close contender for the best episode of the show so far, featuring a young Kevin Hart. Its treatment of religion isn’t particularly deep, but it’s another great depiction of how religions and philosophy never stick unless you make them your own. That’s probably a deeper introspection than Apatow may have been going for, but yeah, this episode rules. 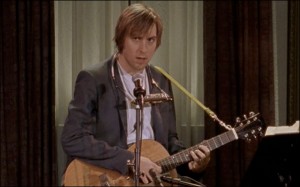 “Parents’ Weekend” (A-)
Another episode that nails another aspect of finding yourself in college. But that’s almost irrelevant because Joel McKinnon Miller stole this episode completely as Marshall’s dad. It may not be the best show about college — that would be Community of course — but it feels a lot closer to what college was actually like.