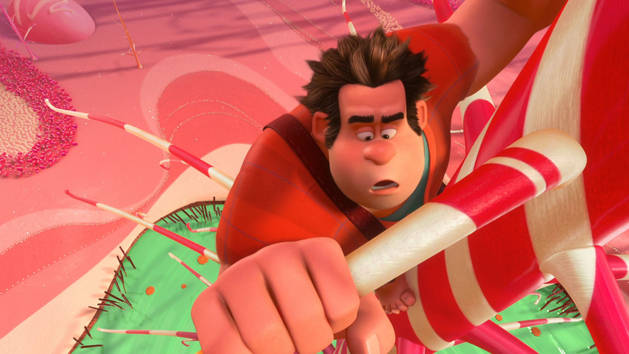 One of many dazzling scenes in the world of Sugar Rush. (Disney)

Every once in a while, a comedy comes along that breaks all the rules. Perhaps not always in a narrative sense, but still in a way that seems fresh and thrilling. It just so happens the last two centered on video games. (The last of course being Scott Pilgrim vs. the World.)

Disney’s new animated feature Wreck-it Ralph is one of the most breathtaking movies I’ve ever seen, but also manages to be funny and heartwarming and deftly told. There’s a TV season’s worth of twists in this little film, and legitimate arcs for nearly every character.

With storytelling skills like that, you’d think only such a movie could come from Pixar. But this one came in-house and it’s a marvel what they’ve accomplished. This may be the most entertaining movie to be released all year.

John C. Reilly, one of Hollywood’s most versatile character actors, gives voice to Ralph, the bad guy in Fix-it Felix, Jr. He’s a hulk who destroys a high-rise apartment, only for Felix (McBrayer) to repair the building and get the glory, while Ralph gets tossed in the mud.

Much like Toy Story, Wreck-it Ralph creates a whole world and backstory for characters ostensibly controlled by (and only of importance to) children. But unlike that Pixar landmark, the characters would rather not be played with. They lead much more interesting lives when they’re off the clock.

Upon the game’s 30th anniversary, Ralph decides he has enough of being perceived as the “bad guy” and leaves his game in pursuit of glory and fame. And much like the arrival of Buzz Lightyear, it upends the entire structure of the society.

But enough Toy Story comparisons. Wreck-it Ralph is its own beast and it’s continually dazzling. The worlds it creates (or modifies in the case of some real-life arcade classics) are a sight to behold, with an extreme amount of detail.

No more so than in the game where Ralph spends most of his time: Sugar Rush. This Candy Land-meets-Mario Kart racer is made entirely of baked goods and features geography like a diet cola volcano below stalactites made of Mentos. It’s in this world where Ralph meets Vanellope, a fellow outcast who tricks her way into one of the daily races. As usual, their friendship is tenuous at best before becoming deep and meaningful.

Similarly, Wreck-it Ralph starts out a simple visual treat for the eyes but eventually becomes something profound. It’s not as emotionally taxing as some past animated efforts, but it’s still viable to make you a little misty.

But that feeling will soon be replaced by sheer wonder, and that’s what makes Wreck-it Ralph one of the year’s best films.