A bold new work from a relentless visionary 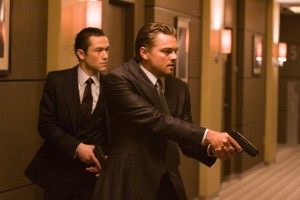 Most films, especially in the summer, are content with presenting only one layer. If a film is particularly ambitious, it may even peel back that layer a bit, giving its characters some emotional resonance or depth.

But then a film like Inception comes along, and shatters everything we know about what movies are capable of.

This is a showcase for Nolan and his brilliant trickery. While the film is visually arresting, it’s also subtly shaking you until the final shot, which will leave you either frustrated or enthralled.

Inception is a real juggling act, with three (maybe four?) simultaneous narratives. But while it’s as philosophically deep as movies get–mainstream or otherwise–when it comes right down to it, this is the most entertaining movie of the summer. You’ll ponder its existential questions, but you’ll also cheer during its fantastic action sequences.

The star of our show is Leonardo DiCaprio, playing–for the second time this year–a man who constantly tells others he has it under control, yet loses more and more of it as the film progresses.

Here, he’s Dom Cobb, the world’s foremost extractor. He infiltrates the dreams of others to steal their secrets. But now a mysterious billionaire (Ken Watanabe) gives him one of those classic offers he can’t refuse. He needs Cobb to plant an idea in a business rival’s head, a feat everyone deems impossible–except Cobb. The payoff is a clean criminal record and a chance to return home to see his kids.

And it’s DiCaprio who gives the film its emotional heft. Were it not for his constant battle against his own demons–his wife keeps showing up to sabotage his heists–the film would still be imaginative and impressive, but emotionally hollow.

Now, some critics are going to accuse Inception of being just that. But this mammoth story rests on his shoulders, and he carries it impressively.

And that’s not to discount the rest of the cast. Each character is given the exact amount of screen time needed to advance the story and make the audience care about what will happen to them.

I was most impressed with new-to-U.S.-audiences Tom Hardy as the cheeky forger. He impersonates familiar faces from the lives of the people they’re infiltrating. But also unsurprisingly terrific are Ellen Page, Marion Cotillard, Joseph Gordon-Levitt and one of the most promising new actors: Dileep Rao (Drag Me to Hell).

Each role is brilliantly constructed and given just enough backstory to gel with the crew and make the audience understand their challenges and frustrations. While DiCaprio is the lead, there’s no overshadowing in this cast; only a level playing field to enrich each performance.

As if that weren’t enough, Inception is also hauntingly beautiful. For that, thank Wally Pfister’s relentless cinematography. His shots give the film the immediacy it needs during chase scenes, but also keeps us on the edge of our seat during dramatic free-falls and keeps us enraptured during its tragic-romantic flashbacks.

Augmenting that is Hans Zimmer’s subtle but pulsating score. It’s edgy and intense, just like the film.

The film has layers upon layers of story and characters, but also has layers and layers of aspects to be impressed with. And yet, because of Nolan’s mastery of story craft, all of those layers come together in a mind-bending masterpiece. The likes of which we’ve never seen before.

My expectations could not have been any higher for Inception, yet it exceeded them on every level–including some I had never even dreamed of.

One Response to A bold new work from a relentless visionary